For a while now on Twitter, I've been putting up posts with the hashtag #ForgottenGamesHeroes lamenting the fates of video game heroes of yester-year who have been ignored by their makers and carers ever since...all of those I've mentioned could do with a sequel or reboot, or at the very least a cameo in some other title! 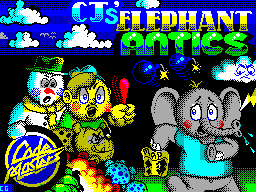 Anyway, I'm busy getting posts ready for Halloween (trying to be prepared this year...we'll see how that goes!)...but I thought I'd do a quick post featuring one of the characters I've mentioned on Twitter, for those who might have missed the posts, and with a bit of extra info about the games!

If you can think of any other characters who should still be in the limelight, you can let me know by tagging them with #ForgottenGamesHeroes on Twitter, or by leaving a comment below..

CJ  (From CJ's Elephant Antics, CJ in the USA) 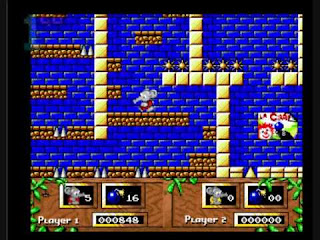 After successfully escaping capture and making his way through many platforming antics in various countries and back home to Africa, and then rescuing all of his buddies from the evil Hunter in the USA, CJ blasted off into space on a space shuttle... 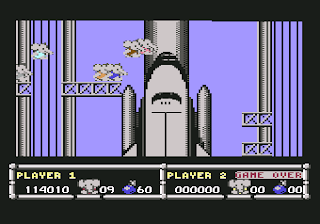 Unfortunately, as I had a Spectrum, that was it for me...I never found out what CJ's adventures in Space were like, and if he ever made it back home!? But, if you had a C64, you could sort-of find out what happened next, if you were lucky enough to pick up one of CP Verlag's disk magazines!

Sort of...because CJ's next game appeared on one of those disks in a somewhat unfinished form, and renamed Jimbo! As you can see from the gameplay above, it's more of the same platforming fun that was in the previous games. The game doesn't have an intro or an ending though, and just loops back to the start...meaning we still don't know what eventually happened to poor old CJ, or even how he ended up where he was!

You might also have noticed that the above video has the heading CJ's Elephant Antics 4...This is because there was actually a third game released on the Game Gear titled CJ Elephant Fugitive, which I only discovered while looking up Jimbo!

Again this looks like more of the same, taking elements from the previous two games and merging them in a sort of Best Of....but it also seems more like another version of the first game rather than a proper sequel!

So we're still left in the dark as to what happened to our favourite liccle heff-a-lump! And therefore he retains his status as a Forgotten Games Hero and requires a revist by Codemasters so they can finally finish his journey into Space and back down to Earth properly!