Out Of The Inkwell - Trip To Mars (Max Fleischer, 1924)...Plus a little nod to Rotoscoping! 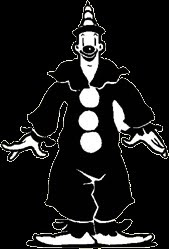 Decided it was time for another weird Out Of The Inkwell cartoon...In this one, Koko the Clown goes on an unwanted trip to mars!

The Out of the Inkwell series came about as a result of Max Fleisher's invention, the Rotoscope...a projector and easel combination that allows an artist to draw on top of live action to get more realistic results. Max's brother Dave Fleischer was working as a clown on Coney Island, so he became the inspiration and original model for what was to become Koko the Clown! 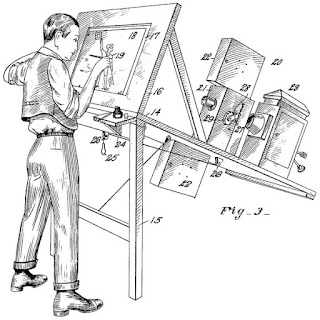 Rotoscoping as a technique has been used in animation, film and videogames ever since Fleischer's first experiments with it in 1915, and you can see examples in lots of titles, like Snow White, Star Wars, A-Ha's Take On Me video, He-Man & The Masters Of The Universe and the original Prince Of Persia game..to name but a few!

Speaking of Prince Of Persia, it's quite odd seeing Jordan Mechner's brother acting out the animations for it in this video he posted on Youtube, because the moves are so recognisable to anyone familiar with the game...

Anyway, it's a pretty cool technique, and I reckon Max Fleischer uses it best, so expect to see more of his cartoons on here again sometime!
Posted by Deadpan Flook at Saturday, February 18, 2012 No comments:

Email ThisBlogThis!Share to TwitterShare to FacebookShare to Pinterest
Labels: Animation, Cinema Of Stuff

Many people credit Resident Evil as having invented the Survival Horror genre...others point out that Alone in the Dark came out before it, and so that has a better claim....yet more others point to Sweet Home on the NES and say that it is the real starting point! Well, for modern day survival horror games maybe....but if you look further back into history, you can uncover a few more titles you could arguably include under that heading.....

Earlier this week I purchased a rather spiffy CD that Andrew Green has put together...The Ultimate Guide To Games For The ZX Spectrum.....a PDF file that catalogues every commercial release for the Speccy and includes a screenshot or two of each game. It's a great read, and a great way to find some titles you might not be aware of and that look interesting...you can pick the CD up from here and check it out yourselves if you don't believe me.... 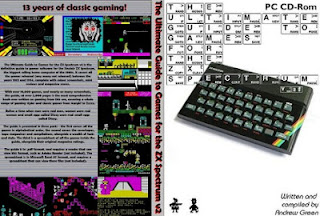 Anyway, it was whilst looking through this that I noticed a game called 4 Minute Warning. I'd certainly never heard of it before, and the mini-review said that it was "fun for a while" so I decided to go to the World of Spectrum site, download it and give it a bash....

Upon loading, the game informs you that the world is on the edge of collapse, but in Britain at least we can look forward to the fact that if Nuclear War becomes a reality we get a 4 minute warning before the bombs are dropped.

This then is a simulation of those 4 minutes, and so you can see if you have what it takes to gather up supplies, store them in your bunker and get yourself safely inside before the explosion..and then try to survive the aftermath! 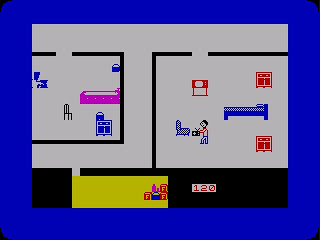 Controls for the game are a bit odd (you move around with 5,6,7 & 8....4 picks up items, 9 drops them) but you can use the arrow keys for moving which makes it a bit easier. You'll find yourself banging off the furniture, and find it quite difficult to position yourself though, as your little character zips round the screen at a manic pace! But this does help build up the tension, as you really do only have 240 seconds to gather up the supplies in your house and retreat to safety...

The first thing you have to do is get the key, and then drop it at the top left of the bunker which is located at the bottom left of the screen. Be sure to pack the other items in carefully, as by pressing 2 whilst you're in the bunker you have to collect the supplies from upstairs too! Once you've collected all the food, water and the radio, hurry back to the shelter before the timer gets to 240 and lock the door by pressing 3! Be sure you're done though, as once you lock the door, it stays locked until the bomb drops! 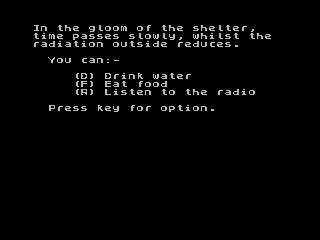 After the bomb drops and you're treated to some flashy borders and Speccy beeps, you'll find yourself in the darkness of the bunker with a few options...should you eat the food or drink some water? Is it safe to go outside? If you've managed to get the radio you can listen to the BBC and see what they're saying...If you fail to make the right choices and try to venture outside however, you'll die due to radiation poisoning.....

If you manage to get it all right though, you can pop out and see what carnage the bombs have brought down with them! Outside you'll find military men that'll kill you for looting if you touch them or other looters who'll murder you and steal your food if you bump into them!

Unfortunately, I've yet to make it past this screen, as it seems that the general goal of this game is to point out that if there is a nuclear war, you're pretty much screwed whatever you try and do.... 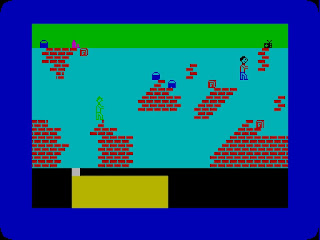 At the time Magination Software released this game via mail order way back in 1984, it seems it upset the few games mags that reviewed it. They didn't like it's bleakness and political references..(it says at one point "That's what you get for voting for Thatcher" and tell's Ronnie to keep his finger off the button at another..)...and it only got low review scores. It seems however, that they didn't make it past the first screen and also, I feel they somehow missed the point...

Yes it's difficult to control, and almost impossible to survive...but every time you play you get a little bit further and see a little more of what it has to offer! It's fun and tense trying to gather up all the stuff before the time ends, and despite looking a bit rubbish it still manages to create a panicky atmosphere.

And, as I hinted at in the opening paragraph, given that the goal is to survive, the games shoddy controls and the fact that it doesn't get much more horrific than nuclear destruction, it could be argued that Survival Horror has been with us since at least 1984...... 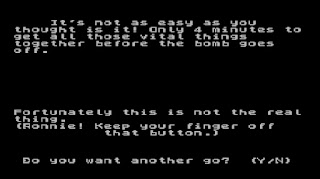