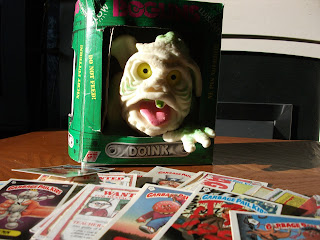 Suddenly and unexpectedly I've become very busy, having started training in a Daycare Centre for a career in Support/Care work...this means I have a lot less free time to write stuff, play stuff or indeed do much of anything! But as I haven't done a pick-ups post for a while, and having amassed loads more stuff since I did the last ones, I thought that until I can find the time to write another games post, I'd share some of the more recent-ish pick-ups with you lot!

In the pic above you can see a Mini-Boglin and some Garbage Pail Kid stickers that I got for Christmas! Doink the Boglin glows in the dark, and is a puppet like the bigger Boglins, but is obviously missing the rather large eye-controls that those have. The GPK stickers come from various different series, and were a rather nice surprise as most of the other stickers I actually own are stuck to paper and falling apart, after I stupidly decided to stick them in an jotter back when I bought them in the eighties. 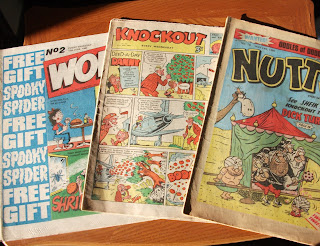 Also received at Christmas were these comics...an issue each of Wow, Knockout and Nutty! Lets have a quick look at some of the stuff in Wow Issue 2, from 12th June 1982 first.... 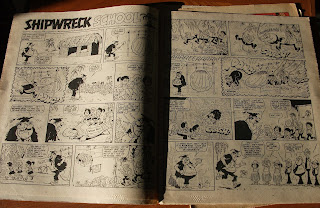 Ah yes, Shipwreck School, which as you'd guess from the title is about a group of schoolkids and their Teacher who end up stranded on a desert-island and adapt to school life island-style, whilst occasionally coming up with schemes to attract passing ships to come and rescue them. In this story they've just completed building the school... 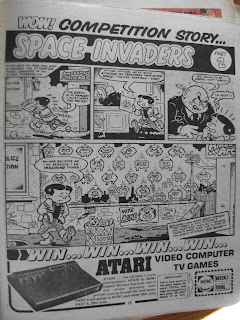 And here we have a competition story where you can win an Atari 2600! I would have jumped at the chance despite only being 5...that was around the time when my obsession with video games was really starting! 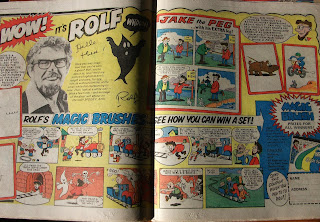 Oh dear...a promotional feature for Rolf's Magic Brushes, a thing I'd completely forgotten about until reading this! The less said the better about Rolf Harris hanging out with kids, opening up his jacket in that manner and inviting them back to his for tea, I think....

Let's have a look at the actual brushes...perhaps that won't be as bad.... 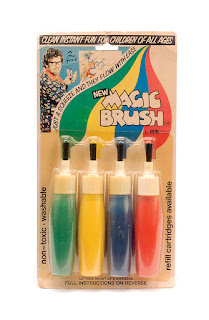 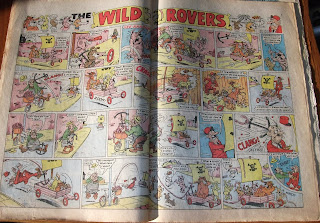 Oh yeah, the Wild Rovers... a strip that reminded me a bit of Top Cat only with dogs and no real leader...and a dog catcher instead of a police officer.... 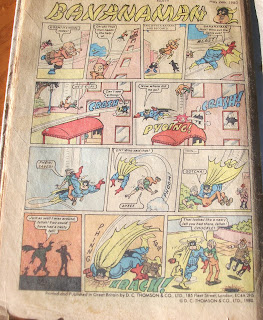 But Nutty was of course famous for being the birthplace of Bananaman! Here we see Eric Wimp before his odd, dark-haired makeover. He was never quite the same when he moved over to the Dandy, and I was really rather disappointed with the Goodies-voiced cartoon...always thought that should have been way better than it turned out!

And what's happened to the Bananaman movie that was supposed to be coming out? That's all gone a bit quiet..... 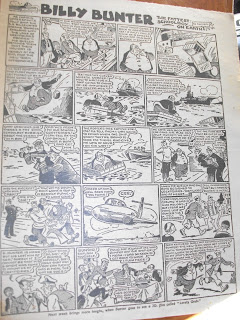 Knockout was a far earlier comic, originally appearing as competition to the Beano & Dandy in 1939! This issue is No.757, August 29th 1953...it features Billy Bunter, a character from an even earlier "boys paper" from 1908! 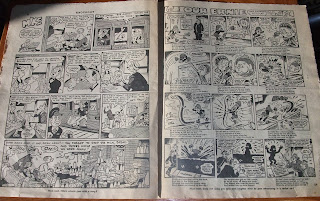 Here's another couple of strips...not much to say about these so you can just have a read at them by clicking the above pic! 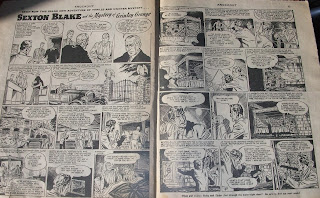 "Poor Man's Sherlock Holmes" Detective Sexton Blake also appeared in Knockout, and he was an even earlier character, first appearing in another paper in 1893! 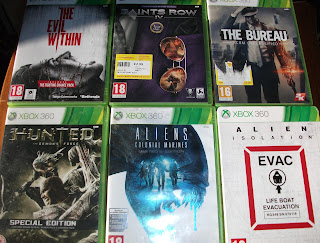 Here's some Xbox 360 games I've picked up.....The Evil Within is a pretty good survival horror game, although it's a bit bloody tricky, so I've just re-started it on an easier setting!
Saints Row IV I've yet to play properly, as I'm still working my way through SR3...
The Bureau is a game where you play as a government agent battling aliens as they take over 1950's Earth..again, only really played it to make sure it loads..it's part of the X-com series but is more third-person-action-team-based strategy than a proper strategy game.
Hunted - The Demon's Forge is another one I've yet to start properly, but looks like it'll be pretty good...especially if I can get someone to play it in co-op mode with me...
Aliens - Colonial Marines is nowhere near as bad as most reviews would have you believe. It's not amazing or anything, but it's still a pretty fun Alien-themed FPS! Maybe the fact I got it for a couple of quid rather than 40 makes a difference though!
And lastly, Alien Isolation is a wonderfully presented stealth-based FPS, that despite being obviously well-put together, hasn't really grabbed me as much as I'd expected it too. I've found the stealthy bits a bit annoying to be honest, and have actually been getting a lot more enjoyment out of Colonial Marines! Perhaps I need to restart it when I can immerse myself a bit more and give it a more patient play-through..... 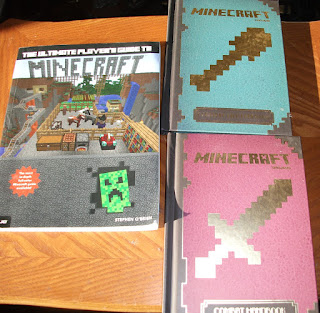 Finally for today here's some Minecraft books I found in some charity shops for a couple of quid each...all of them have some pretty interesting building ideas, which is why I picked them up! Inspiration! For some reason though, my Minecraft on 360 has reverted to the Trial version...something to do with me no longer having the internet in my flat and playing it offline I reckon. I can't seem to play any of my other digital games like Assassin's Creed 4 or Lost Planet 3 either, so I'll need to look in to that and get it sorted out...

Anyway, I've loads more stuff to show, so the next couple of posts will no doubt be more of the same, as I can just upload the pics and spout nonsense about them quite easily, so maybe next weekend I'll pop up the next load of stuff. Not making any promises though...but yeah, hopefully be back soon for part 2! ;)