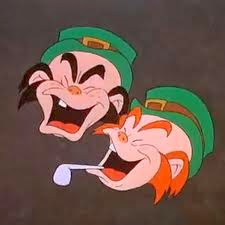 Another month passed all ready! Where the heck is time going these days? I'm a bit busy getting stuff ready for something pretty major, so haven't had as much time as I'd like to be posting on the blog...but it's all going to be  very exciting! Well, for me anyway...and hopefully for a few of you at least! All very mysterious I know, but more news will be coming about this soon, so keep yir eyes peeled!

The much delayed end of the Gruesome Games list is being held off until October now because of all this though, where I'm planning to change it up a bit and just have one game a day after the initial catch-up...which should mean I actually have time to get through them and we won't be left with 20 still to do next year! This also frees me up to concentrate on some other new things I've been wanting to stick on the blog, so after the next month or so, the posts should be more frequent and a little more varied...In the meantime, Happy St. Patrick's Day! And have another lazy cartoon post filled with gold and leprechauns!