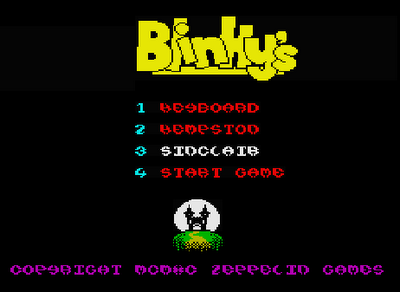 Drumtrochie Castle (like any old castle worth it's salt) was haunted. Ancestral ghosts had wandered it's halls for years...moaning and groaning, rattling chains, all the usual stuff...They had a rare old time of it..

All that is, until Red Laird McTavish decided he'd had enough! "Och! It's ma castle, and nae ghosties or ghoulies or long-leggity beasties are going tae spoil ma legendary Haggis Banquets!" he thought to himself. So he decided to take up ghost-hunting and rid Drumtrochie of every last spooky spectre. 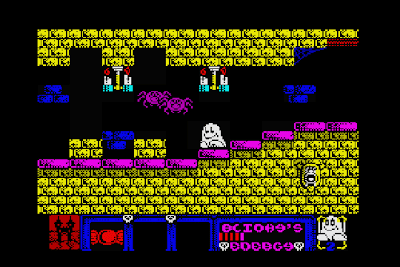 Exactly 100 years have passed since he did just that, and the Head Spectre at the Ghost School has decided that Red's descendant and current Laird, Hamish, has bragged about his ancestor's antics once too often. And anyway, no castle should be without some spooks to scare things up a bit...

And so he sends his star pupil Blinky out on his first assignment..to recapture the castle for haunting! Blinky has only one night to succeed in his mission or he faces another 100 years at scare school! Yipe! Truly a fate worse than death! It is up to the player then, to help our sheet-like chum to accomplish his task and put the wind up Hamish's kilt! 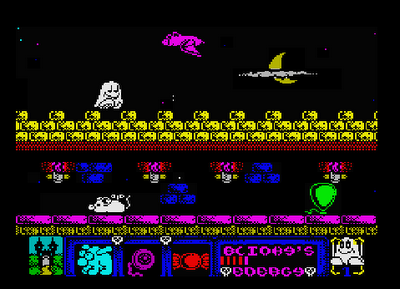 Blinky certainly lives up to his name, fluttering his eyes as you bounce along the platforms trying to round up ingredients for a magic potion. These are scattered throughout the mansion, which although devoid of spooks has a nasty collection of rats, bats, insects and the like..all of which seem to be out to get poor Blinky! The old place is also in a bit of a state and pieces of it keep tumbling down, making it even trickier for our hero to travel unscathed...

Bouncing around on the platforms can be a bit annoying sometimes too, as you'll occasionally clip the edge of one, which sends you bouncing off in a different direction from which you intended to be travelling in...sometimes landing you in one of the castles many spikey trap pits! A bit of practice soon fixes this though, and before long you'll be zipping about over battlements and down the loos! 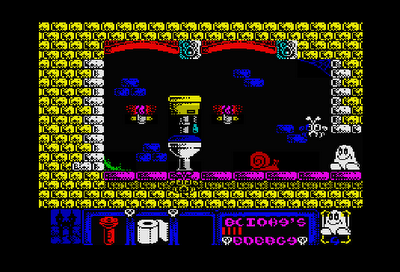 Oh yes...did I forget to mention the loos? Another way to traipse about is via the toilet-warps, which will flush you away to another part of the castle! You have to make sure you have enough bog paper though.....I suppose Blinky needs to wrap himself in something so he doesn't end up as a poopy poltergeist!

It's the little touches in Blinky that really make it stand out from the crowd a bit....the aforementioned eye-fluttering, the bits when you go into a dark room and can only see his eyes, the toilets...all of these give it a certain charm. The sound is a bit functional, but there's a nice tinkly tune on the title screen that sets it up nicely as a cutesy, colourful little adventure.

Ultimately, I found our pale little pal a lot of fun to hang around with, and although the spikes and falling masonry can get a bit annoying at times, the game has a definite one-more-go quality that saw me jump straight back into it for another attempt. Blinky gets his A+ from me at least....and as it wasn't the last time he haunted the Spectrum, we might be hearing from him in this blog again at some point... 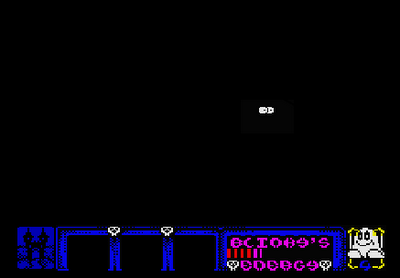