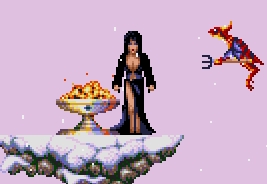 Right...hopefully my computer has stopped playing funny buggers and decided to settle down, and I can get on with posting things without the fear of another error freezing everything and switching itself off!

Before I continue with the list though, I just want to thank everyone who has been following and commenting on the blog...it's just had it's 10,000th page view which is pretty freakin' awesome, even if it's just one guy somewhere looking at it over and over again! So thanks....whether you've stumbled upon it whilst looking for some random picture or horror game, or whether you're one of the guys and girls who read every post...it's when I see the number of views or read the comments that keeps me motivated to continue doing this, even after I get really frustrated with massive problems like the other night's refusal to work by the computer!

And if you're a lurker who visits all the time but hasn't clicked the "follow" button, don't be shy! Click that button and let me know you're interested, and I'll be kept motivated even more! Unless of course you've just visited again to see if I've stopped filling people's minds with drivel, in which case..sorry, that's not very likely to stop anytime soon I'm afraid!

Anyway, on with the show I suppose! We've still got the rest of these games to get through, and loads more games and other things I want to start covering too!! 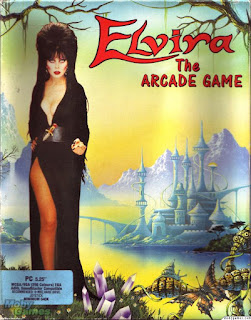 As I said last year, what's a spooky list without Elvira!? Here she is in a jumpy-leapy, fiery-shooty platformer on the Amiga! The plot of the game is some nonsense about one of her ancestors appearing as a ghost, and offering Elvira his castle to live in if she can prove herself worthy enough by battling through two dimensions he's lived in in his previous lives!?!?


Once you beat the first two levels, the Transylvanian Castle level will be unlocked, and if you beat that Elvira will become the queen and the castle will be hers. 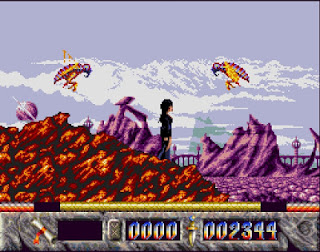 It's not too bad...it's not too good...it's just a run-of-the-mill, pleasant looking Amiga platformer with added spookiness and ladybumps......there are power-ups to find, a trader who appears to swap spells with, and the usual odd beastie-baddies to deal with along the way....all pretty standard stuff. 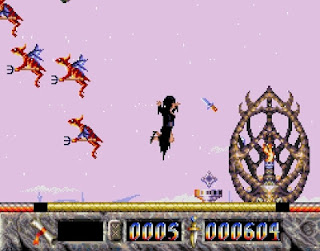 Worth checking out I suppose, especially if you're a fan of Elvira...just don't expect it to become your new favourite game or anything, and you should do fine! Right, another game down....Next!!! 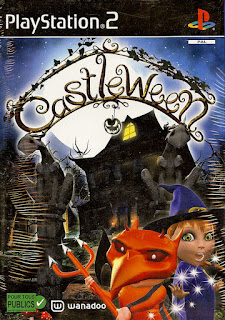 Oh god....remember last year when I played the GBA version of Castleween and quite enjoyed it, so I  asked if anybody had played the PS2 version that supposedly existed? Well, I found it a couple of months back for a couple of quid and thought I'd see what it was like....

What I found was a very linear trot through a very, very average game...You again play as either a little boy dressed as a demon who can manipulate fire, or a little girl dressed as a witch who can use ice spells...and try to rescue your friends who have had their souls stolen by the Bogeyman... 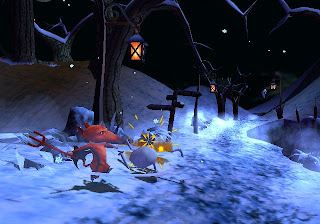 Some strange little imp guy appears, talks to you in weird gamespeak while text appears below, and then you're stuck along a fixed path, followed by a really dodgy camera and have to fight past beasties and puzzles using the children's respective powers... 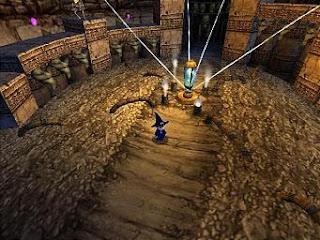 It could have been a really cool little game, and in fact is on the GBA, but with the weird camera angles, boring linearity and crazy distance the game puts you back if you lose a life, you'd be best ignoring this and sticking with the handheld version instead...... 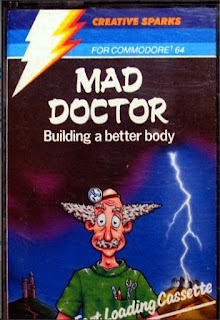 You can almost be certain that if you have a scientist with an odd name who lives in castle on top of a hill overlooking a quaint old village, come the first thundery shower and he'll be creeping about the graveyards acting rather suspiciously around town and carrying large bundles of something about the place...

So it is with Dr. Franz Johann Blockenspiel, who has devoted his time and energy to gaining worldwide fame as the creator of life! Of course, in order to achieve this goal, he has to first dabble a little with death..... 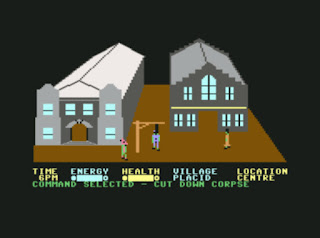 Taking control of Franz, you wander around the village of Strudelberg, looking for parts for which to create a body you can use in your twisted experiments. You can either go to the graveyard and search the coffins for a suitable corpse or go into town and cut down a recently hung criminal! Of course, doing such things won't go unnoticed by the villagers, who if you rile up enough will start rioting and hunt down and kill you!

So how do you get a body by other means if the village is too busy??? Well, along the paths outside the village, you sometimes encounter a lone traveller...and who's to say what happens to lone travellers who disappear on dark, stormy nights.....Mu-hu-hu-ha-haaaa! 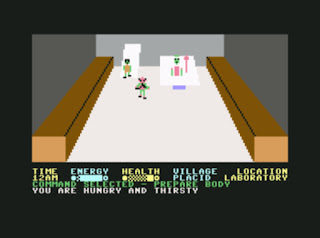 I can't believe it's taken me so long to find this game! For someone who loves horror games as much as me, it's a real hoot to roam around a village breaking into hospitals to steal equipment, cut down corpses and loot graveyards, pop up in the tavern through a secret passage that leads from my castle.....all the while avoiding an angry mob and the police who are all out to stop my crazy experiments!

The game feels years ahead of it's time, giving you a huge list of options and things to do...you can read books on the creation of life left by your uncle, you have to eat & drink to stay alive, you can lock people in a cell for use later if the body you build doesn't work out....the game is filled with choice! If you succeed in building a monster from good parts, getting it alive by electrifying a kite and are able to subdue it with tranquilisers..you can even show it in the village hall and gain the fame and notoriety you seek! 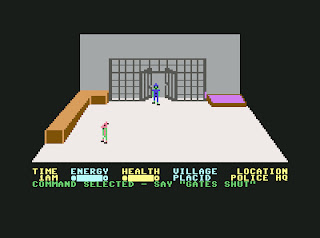 The controls can be a little tricky at first, and there's not much in the way of sound....but everything else about this game is great, and I highly recommend it! The fact it allows you to murder innocent victims might seem a little controversial, but like modern day games like GTA, if slaughtering masses of random folk isn't your cup of tea then there are other options available! I mean, after all...I would never do such things, would I...*cough*...Your Honour?