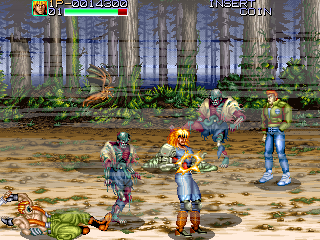 Another game filled with pretty much every horror baddie type ever! It's a pretty standard side-scrolling beat-em-up, with three selectable characters with their own sets of moves and abilities. You know the kind of thing! The horror theme makes for some pretty disgusting death animations though, and it's pretty fun.... 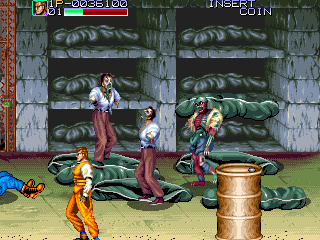 The repeated sayings of the characters can get a bit annoying, but it is bearable. And if keep pumping credits in, or are just really good at the game, then you'll get to see the bizarre Bonus Levels! The first one has you participating in some sort of Whack-A-Zombie, where zombies heads stick out of the ground and you need to kick them.....and the second one has you hurling a zombie at some others set up like bowling pins! So yeah, worth a go or two...

Jackie Estecado has just turned 21...he's also just survived a car crash, and an attempt to blow him him up by his crazy gangster uncle...oh, and an ancient demon entity has awoken in him and he now sprouts tentacles with teeth in tricky situations!

Based on a Top Cow comic, this game has you out for revenge against your uncle and the crimes he's committed against you and other folks, using your newly acquired demonic powers to help you out! Of course, being ancient evil, The Darkness isn't entirely on your side as it wants to possess you completely and get rid of you so it can unleash havoc upon the world... 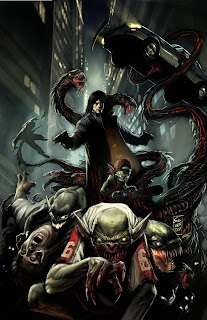 Playing your way through this FPS, you'll find yourself taking out any light sources you can, as you tend to work better in the dark. Lights hurt you after the Darkness makes his first appearance, and the little Darkling creatures you can summon for help won't go past any lights either, so you should definitely learn to embrace the shadows!

Various guns are at your disposal, but it's when you decide to use the Darkness that the fun really begins! You can control the tentacles that spring from your body, and make them crawl up walls and through vents....biting baddies heads off when you find them or impaling them and flinging them off roofs!

The aforementioned Darklings can be sent forward to deal with any enemies lying in wait too, and their witterings add some much needed humour to the game! As the game goes on you get even more powerful abilities until eventually you become a pretty much unstoppable force!

The story will keep you gripped to your seat too, as you hunt down your uncle and his lackies...with occasional visits to another time and another world, that I won't say too much about other than that, like the rest of the game, it's very dark in nature but utterly awesome!

As a little extra, Public Domain cartoons and films have been added to the game and can be watched on any of the Tv sets lying around...it's even possible to sit and watch a full length movie snuggled up on the sofa with your in-game girlfriend! 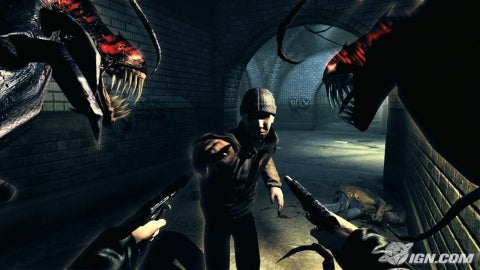 As far as bad points go, there are occasional control issues with the tentacles, and the multiplayer is laggy as hell and no one really plays it these days....but other than that, this early Xbox 360 title is brilliant and can be picked up for about 3 quid these days! A sequel is on the way early next year too, so you really should go pick this up right away! 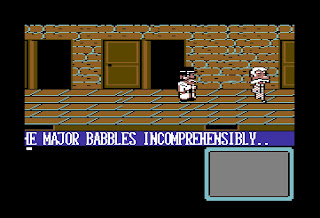 Halloween is also a good time for a decent murder mystery, and this little gem on the C64 has you filling the shoes of a Detective looking for a murderer in the house of Angus McFungus, who recently fell afoul of the killer! All of the guests who were present in the residence at the time of the crime have been kept in the house, and on this dark and stormy night you must question them and hunt for clues...gathering enough evidence to properly collar the culprit! 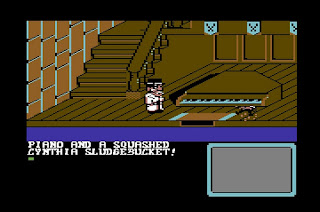 As with all good murder mysteries, it's not as simple as all that....more guests are murdered along the way, locked doors bar your progress and the occasional secret passage must be found! And of course, the murderer eventually decides to try and off you too!

This is a great little adventure, and you'll enjoy trying to work out who the killer is! You'll be notified about the other deaths as they occur and as you can see from the screenshot above, they can be pretty grisly but pretty funny when you stumble upon them.

Go use your detective skills and track this one down right away.......

Now if you know your horror games, you'll know all about the Resident Evil series..With 6 proper games (including Code Veronica) and various spin offs, if you've been playing games at all for the past 15 years or so it'll be pretty remarkable if you haven't heard of at least one of them. One that you might not be familiar with though, is this light-gun enabled one on the PS2 !

An Umbrella employee named Morpheus has gone a bit off the rails (what a surprise!) and has nabbed a bit of the G-Virus..a newly modified version of the T-virus that saw Raccoon City wiped from the Earth...and has hopped aboard an Umbrella owned luxury cruise ship to escape, but also decided to use the virus to experiment upon himself and the other passengers!

The American government sends in special Anti-Umbrella Pursuit Investigation Team member, Bruce McGivern, to retrieve the virus and stop the threat. Also onboard is Fong Ling, a Chinese government agent who is also out to stop Morpheus her own way. Cue much tumbling around and flirting from both agents as they have the usual love/hate relationship type thing that always seems to occur in such situations...


Unlike the other Survivor lightgun games in the Resident Evil series, this one allows you to walk around in 3rd person mode using the GunCon 2 or a standard PS2 controller. This helps it feel more like a proper RE game, and makes it far easier to explore and pick up items.

When you do come across the inevitable zombie baddies, a quick press of the trigger on the lightgun sees you enter 1st person mode, and you can blast away the undead numpties at your leisure before popping back into 3rd person to leg it away again.

The game is filled with the usual rubbish, campy dialogue and the environments can sometimes feel a bit empty, but the story does feel like a proper offshoot of the numbered RE sequels, and has the usual increasingly difficult and weird bosses to defeat. It makes an interesting and enjoyable change from the usual Resi stuff, so if you own a lightgun and a PS2 you should definitely get this one in your sights...


Count Frederick Valdemar has taken it upon himself to eradicate all the ghosties and ghoulies from his castle, and in this arcade adventure you play as he and must collect magic skulls and various other items and power ups to aid you in your quest.... This game has a great spooky atmosphere, helped by the cinema-style intro screen and creepy music. It's a tough little game, but if you stick with it you'll eventually work out how to reach certain objects by moving tables, or finding hidden doors, etc.

The different baddies are pretty cool and make the game a delightfully horror filled treat as you square off against werewolves, vampires, Frankenstein-style monsters...all the usual suspects really...and they're all nicely animated and everything, so yes...another fantastically fearsome game for the list!
Posted by Deadpan Flook at Saturday, October 15, 2011