Oh dear...it definitely looks like we won't be making it through 100 games before Halloween then! I should however make it to 50....so that just leaves the question of what to do about the next 50....What do you guys paying attention reckon? Do you want me to leave them until next year, and let you have time to find and play the first lot? Or do you want me to keep ploughing through them, posting them up over the next month or so?

The problem with the second option is that Halo 4 comes out next month, so I'll be spending a fair bit of time playing that! I'm sure I could still drag myself away every few days to write the blog though...so not really too much of a worry.....

But yeah...let me know what you think in a comment below....for now, let's get back to the next lot in the list! 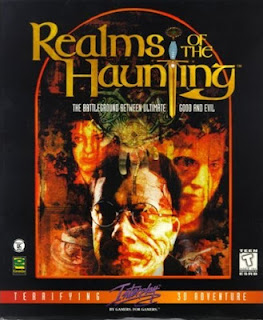 Not far into this one, but loving every minute of it so far! You play the role of Adam Randall as he returns to his home village after a strange priest arrives with a package from his recently deceased father...distrusting of the priest, he ignores the package, but starts having dreams about a strange house! So he eventually opens the package, and finds inside fragments of some carved objects...He decides to go a house mentioned by the priest, who had said that his father had discovered something there.....and it turns out to be the very house in Adam's nightmares!

The actual gameplay is a nice mix of first-person-shooter and point-and-click adventures, something which made it stand out at the time, but now makes it feel like the granddaddy of games like Penumbra or Amnesia. It's loads of fun exploring the mansion, with Adam giving voiced descriptions of the things he's examining...and there's puzzles to be solved in order to get deeper in to the house and try to uncover the mysteries inside. These usually involve finding the right key, object or switch...but they do help give a survival-horror-type feel to the game as well.. 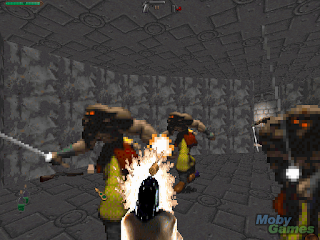 Various monsters will appear to try and stop you in your tracks too, but a nice variety of guns and magical weapons you can pick up along the way and use in the FPS style the game does very well, will help you dispose of these creatures and keep moving.... 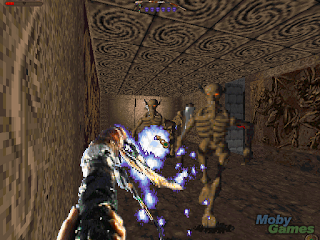 The FMV scenes are nicely filmed too, feeling more like a low budget, but not low quality, movie..the actors are all pretty good and it feels a step up from the normal b-movie type fair you usually get in 90s videogames.

All in all, it's a great game that should appeal to FPS fans, point & click fans and survival horror fans! I got my copy from gog.com, which is probably the best place to get it from if you're going to be playing it on modern PCs...I'll now let you have a look at the making of documentary, so you can see the hard work the folks who made it put in making this underrated classic! Watch it and then go buy the game immediately! 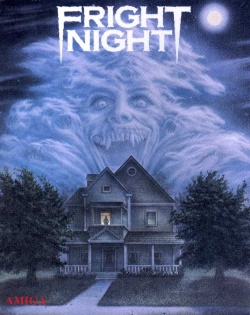 Another game I only recently discovered, this is a game based on cult 1985 horror movie Fright Night! You play as vampire Jerry Dandridge, as he roams his newly bought house looking for victims to satisfy his blood lust! 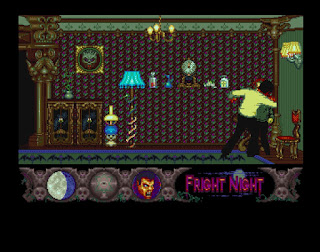 The victims have armed themselves with crucifixes and holy water, and they'll throw these at you as you approach them to sink your fangs in, so you'll need to try and avoid those or they'll hurt you and you'll lose vital energy. Also, some of the victims aren't particularly healthy and are filled with bad blood, so keep an eye out for those too, as drinking too much of that can be harmful to Jerry too! 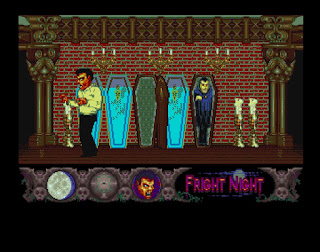 You'll need to be sure to make it back to your coffin before sunrise too, or you'll end up rather crispy! This will move you on to the next night, or level, where you can start hunting down more victims! As you progress through the levels though, things get a little more difficult! Strange spirits and ghostly hands appear to try and stop you too, and these really drain your health rather quickly so extra care should be taken to avoid them... 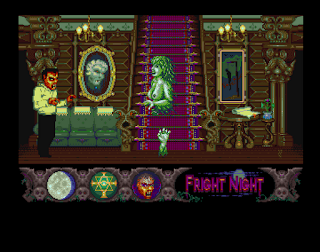 It's a pretty fun arcade action game, alright for playing in small doses and ideal for a game or two to celebrate Halloween! I recommend you hunt it down and get your fangs into it sharpish!!! 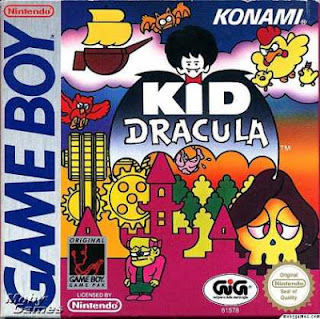 Time for one of the weirdest entries in the Castlevania series now! In this 1993 sequel to NES game Akumajo Special : Boku Dracula-Kun (a game I might look at next year) you take control of Kid Dracula as he is again woken from his slumber by evil demon and general all round nasty-sort Galamoth! 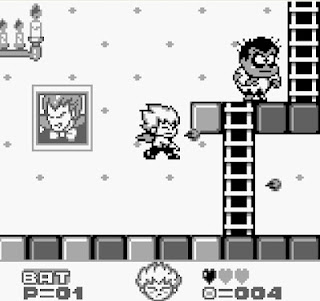 Having been asleep for quite a while, Kid has forgotten most of the spells he learnt in his previous adventure and so must try and find or remember these during the course of the game...which plays more or less like a slightly easier, more platformy version of other Castlevania titles.

Kid jumps around firing projectiles, transforming into a bat to reach difficult areas, etc....whilst also climbing ladders and avoiding falls and traps...all the stuff you'd expect,  but in a cutesy, more child-friendly style... 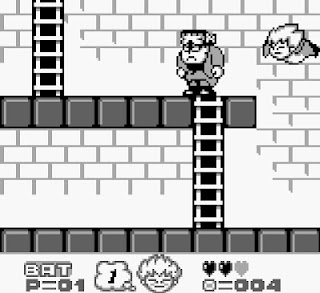 Needless to say, it's a lot of fun...the levels sometimes feel a bit bare, but if you're looking for some portable spookiness to play on the bus whilst making you way to a Halloween party or whatever, you should definitely consider giving this a go! 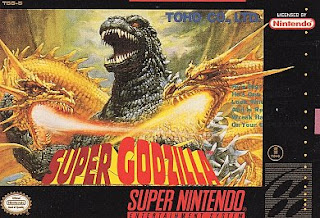 Initially, this SNES game looks to be doing everything right....there's a snazzy intro that has the proper Godzilla theme music, and a great sample of Godzilla's roar and the plot seems suitably crazy and monster filled to make for a decent conversion of the movies... 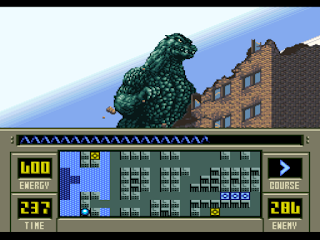 What a pity then, that the actual gameplay basically involves you trudging around a rather boring map, looking at a Godzilla that, whilst nicely realised, only does about two different things...smash buildings or get shot...Once you find the monster you have to face on that particular level, the gameplay changes and takes an even bigger turn for the worse... 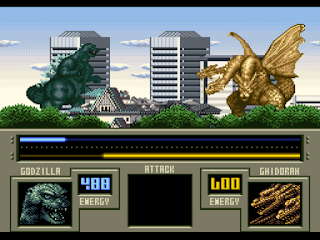 Again, everything looks as it should and rather groovy, but the bizarre fighting system that the game uses means that for the most part you'll just be wildly mashing buttons, watching cutscenes of you or the monster bashing each other, then mashing more buttons with little to no effect....

Once you do beat a baddie, it's on to another trudge around another boring map....Not worth playing except for the novelty of being Godzilla for an evening I guess...... 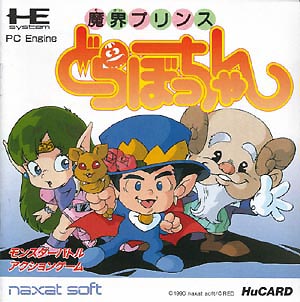 We take control of another little vampire in this title, and go on a nice little platform adventure over various levels filled with all manner of ghosties & ghoulies! Again, it's one I only discovered in the last few weeks whilst getting ready for the blog... 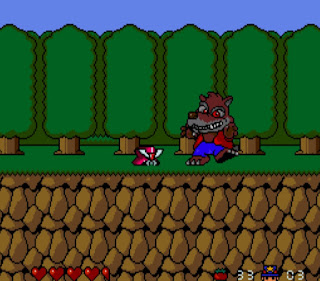 Your little vampire controls really well, and you can collect power-ups to upgrade to different suits with various abilities to help defeat all the nasties... Strange, Easter Island-headed zombie butler statues occasionally appear too, to make platforms for you to stand on to reach more areas... 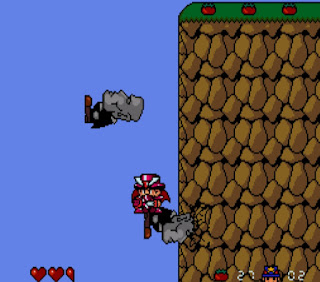 It's another great little platformer, with some of the enemies being particularly groovy! My favourites are the totally insane looking zombies that you can see below, and right at the top of this post...funny little guys! 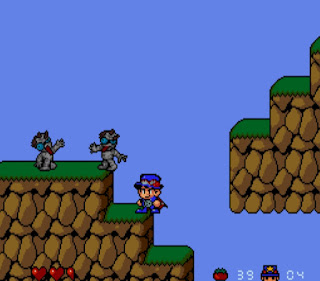 As I say, it's a groovy little game, and well worth a bash....I'll be taking a look at it's sequel, The Twisted Tales Of Spike McFang on the SNES, a bit later in the list, so hopefully we'll get to find out a little bit more about the little vampire prince then!