Gah! Here's a quick few games up for Midnight! The rest will appear tomorrow...it's the Day of the Dead anyway, so still ripe for spookyness! First a couple of Speccy games released for Halloween last year.... 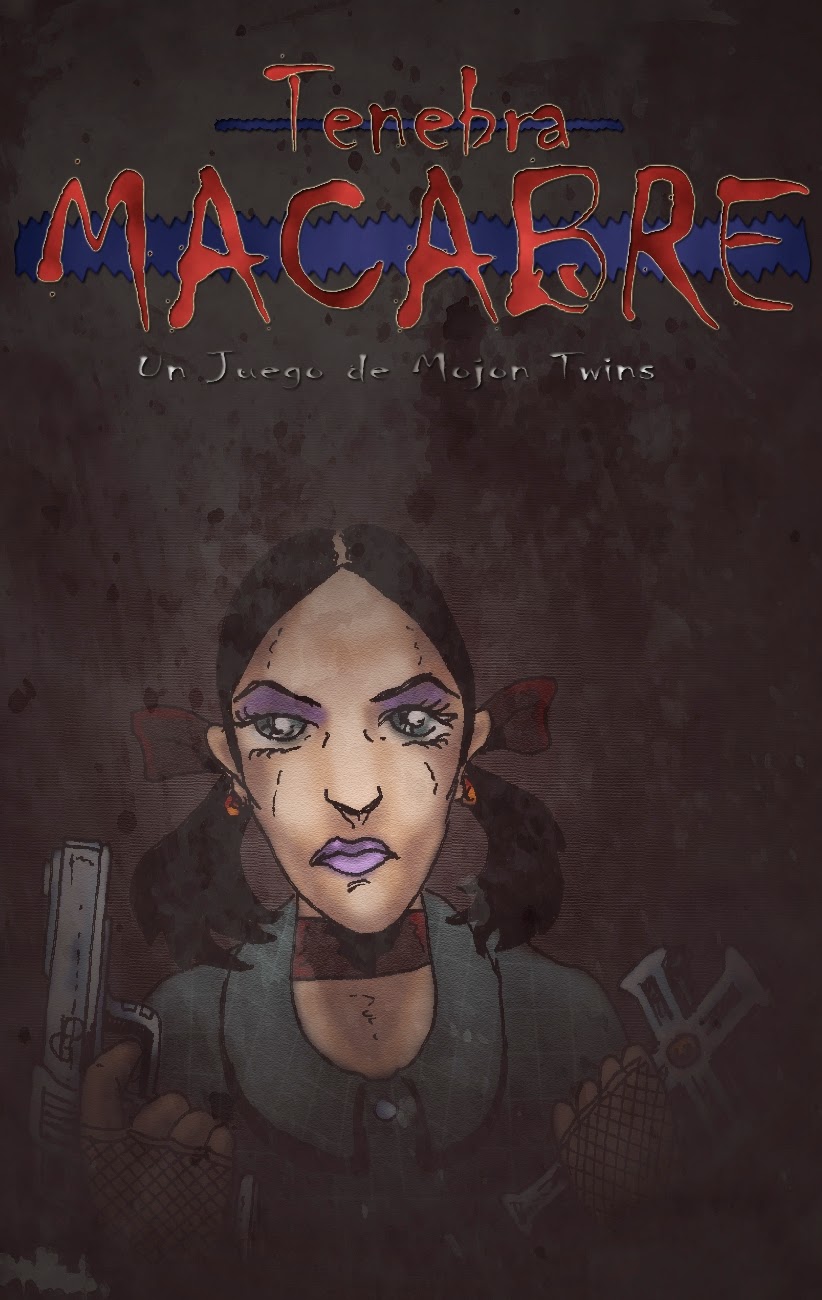 Mega Meghan, star of another Mojon Twins Spectrum game, has found herself trapped in the rather spooky crypt of Jurufrasto Morante, The Ghoul from Alicante! To escape, she'll need to break an evil spell cast on the main door to the crypt and the only way she can do this is by lighting a candle in each and every room of Morante's tomb! 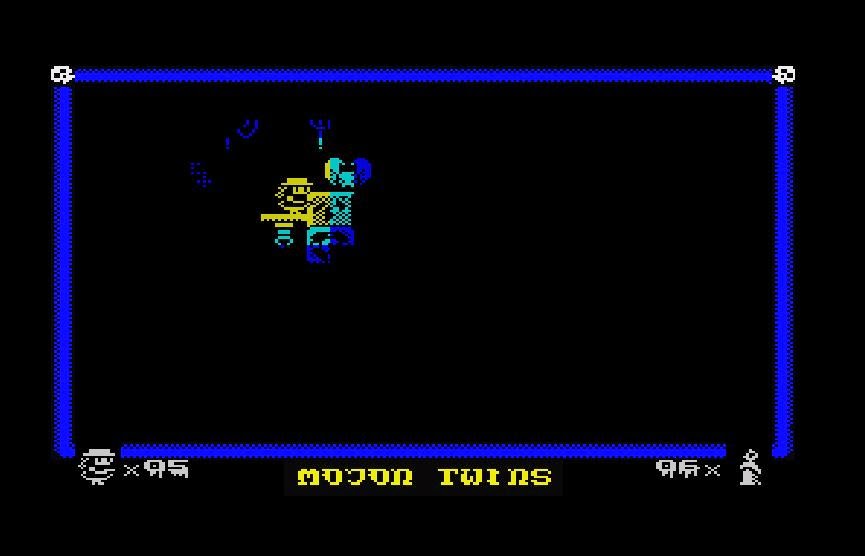 Of course, there's a catch...the catch being that as all the candles are out, Meghan has to navigate the crypt in total darkness! Well, not total darkness..you can see just a tiny bit around Meghan...but the rest of the screen is really, really dark! Luckily, a thunderstorm is raging outside and the lightning flashes light up the rooms for brief moments, allowing you to see where platforms and dangerous nasties are! 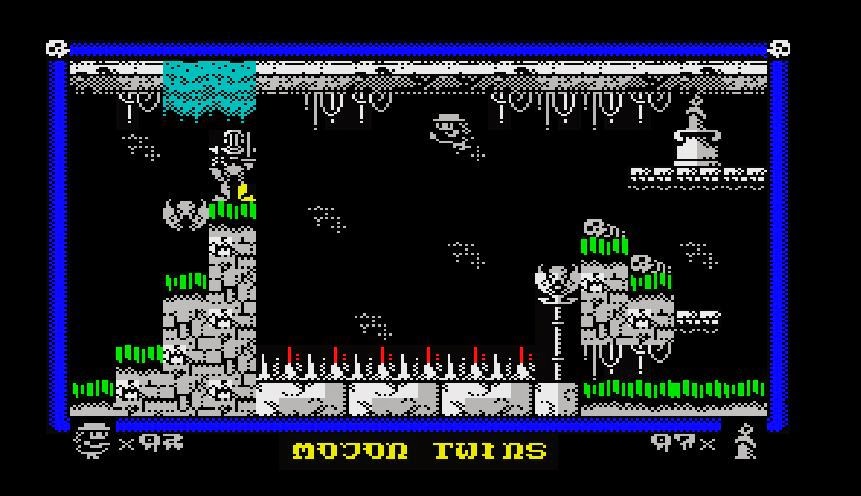 Once you light all 24 candles, Meghan will be able to escape to freedom! It's a great little game, and the lightning is a nice touch that really gives the game a spooky atmosphere....definitely worth a few games on spooky winter nights! Download it from here.... 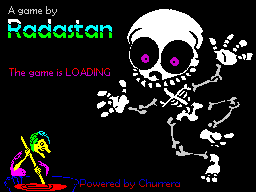 Poor Mr. Bates! He's only gone and lost 5 sacred pages from the Sacred Clan's Book Of Witches! Not only that, but doing so has gotten him cursed and now he's a living skeleton!! The only way to put things right and bring himself back to full & proper life is to retrieve those 5 pages... 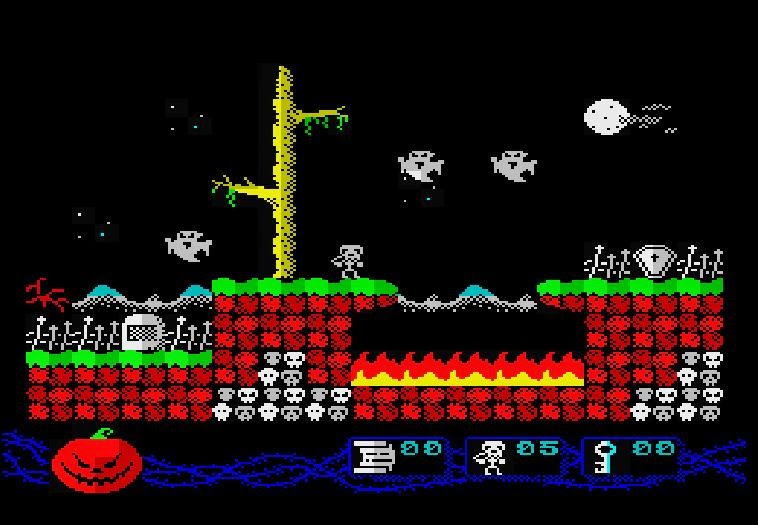 A few beers are scattered around the levels too so you can regain some health, which you'll be needing to do as this game can be quite tricky with just 5 lives! Still, it's just the thing to get you in the mood for Halloween! Radastan has done a great job with the Mojon Twin's Churrera Engine, especially with the graphics which are groovily ghoulish! 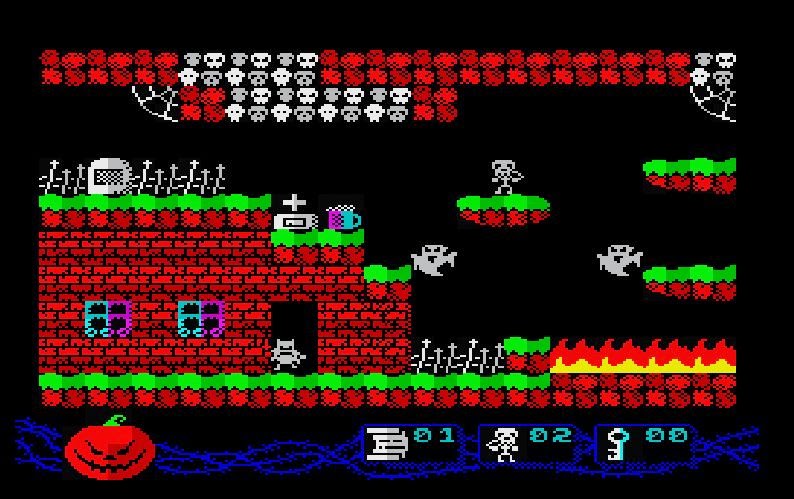 You can download it from here, and you really should! Go do it immediately or I'll get the Sacred Clan to curse you lot too! 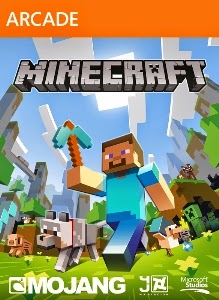 "WHAAATTTTTT!???!??" I hear a million (well, slight exaggeration...maybe 30 or so) voices say! "Minecraft in a horror game list! Surely you jest, good sir!?"

Well, if you're saying that, then clearly you've never played Minecraft's Survival mode properly! I mean it's right there in the name...Survival...and that is what this Minecraft mode is! Ultimate Survival Horror!

You start stranded in a wilderness with nothing but the clothes you have on, and have to find some trees, chop some wood with your bare hands and then create tools to build a shelter before they come out at night...

Zombies, Skeletons, Spiders... All of them creeping towards you and wanting to put a stop to your breathing!  If you haven't created weapons and built a shelter by nightfall on the first day, you will die! And when you do get inside your shelter, you probably won't have been able to create a bed yet and go to sleep so you can skip until morning, so you have to sit there...all night...listening to the moans, groans and hissing outside the door. Unable to do anything until daylight comes to your rescue.... 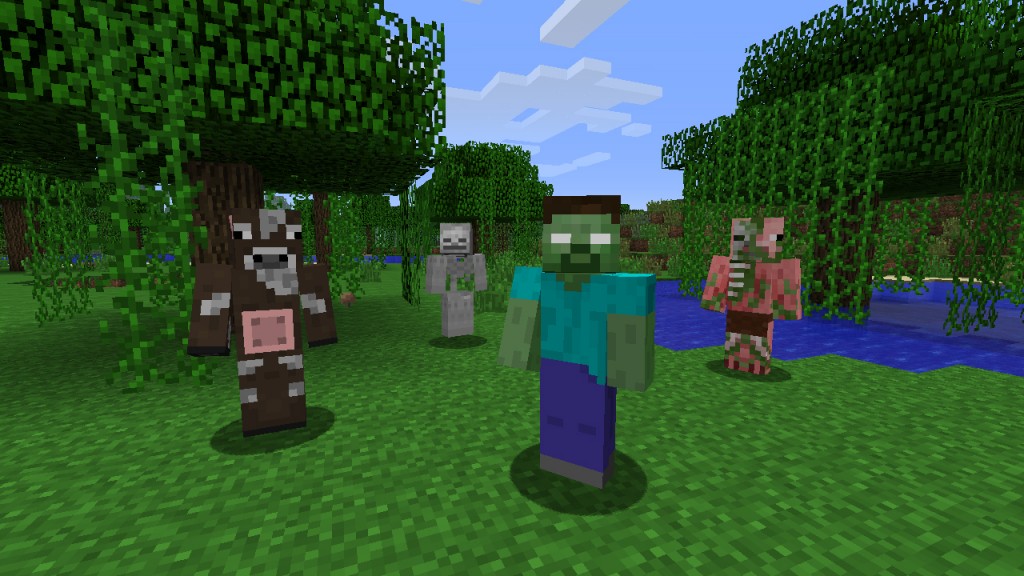 And then there's the Creepers! Even when you do manage to progress far enough into the game to survive the other enemies, there's always the threat that one of these numpties will sneak up behind you and explode with a massive KABOOM, making you jump about ten feet in the air and then come to the realization that the epic castle you've just spent 4 hours building has a hole in it the size of an elephant...

And the Endermen! These teleporting Slender Man rip-offs will mind their own business, and just randomly shift blocks around...unless you look at directly at them! Then they emit a horrible, terrifying noise and come after you like the rest of the enemies! 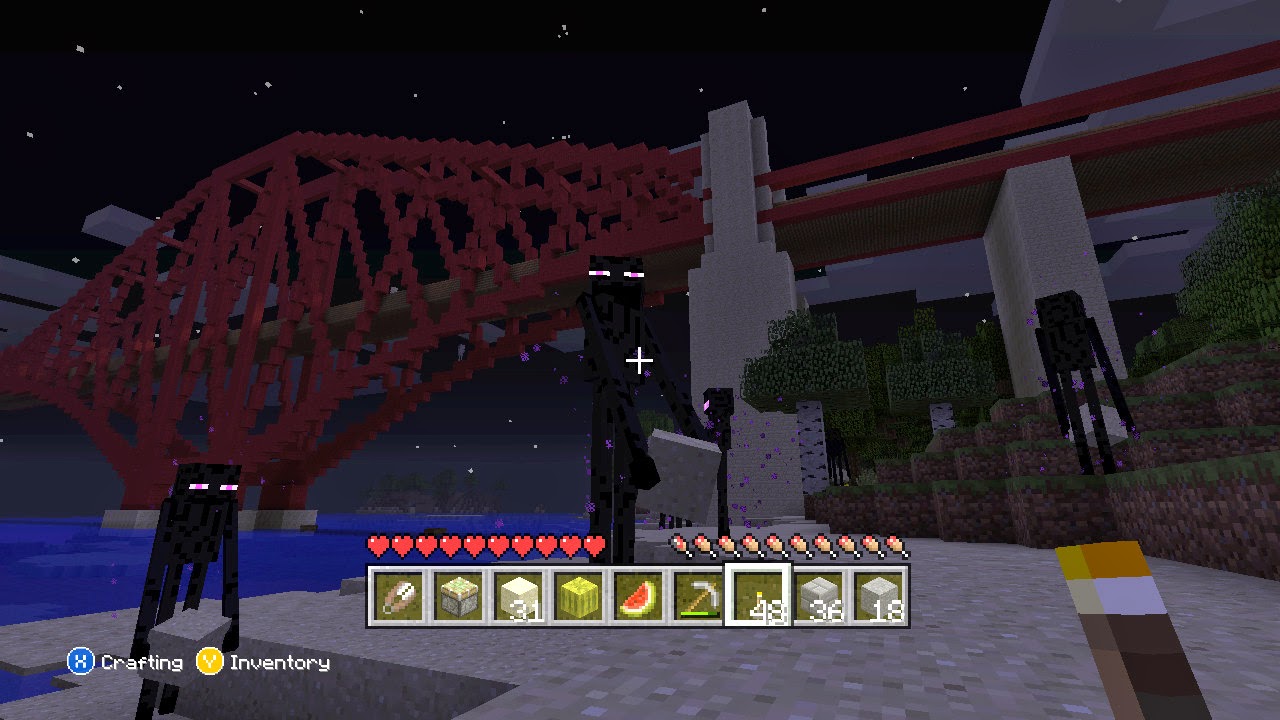 Then there's the Nether with it's Ghasts and Zombie Pigmen...and the Slime.....and the ever present threat of a fiery death in the lava pits...and..and...Well, you get the idea! Minecraft can be scary stuff, especially if you're under the age of 10, which a lot of its players are! 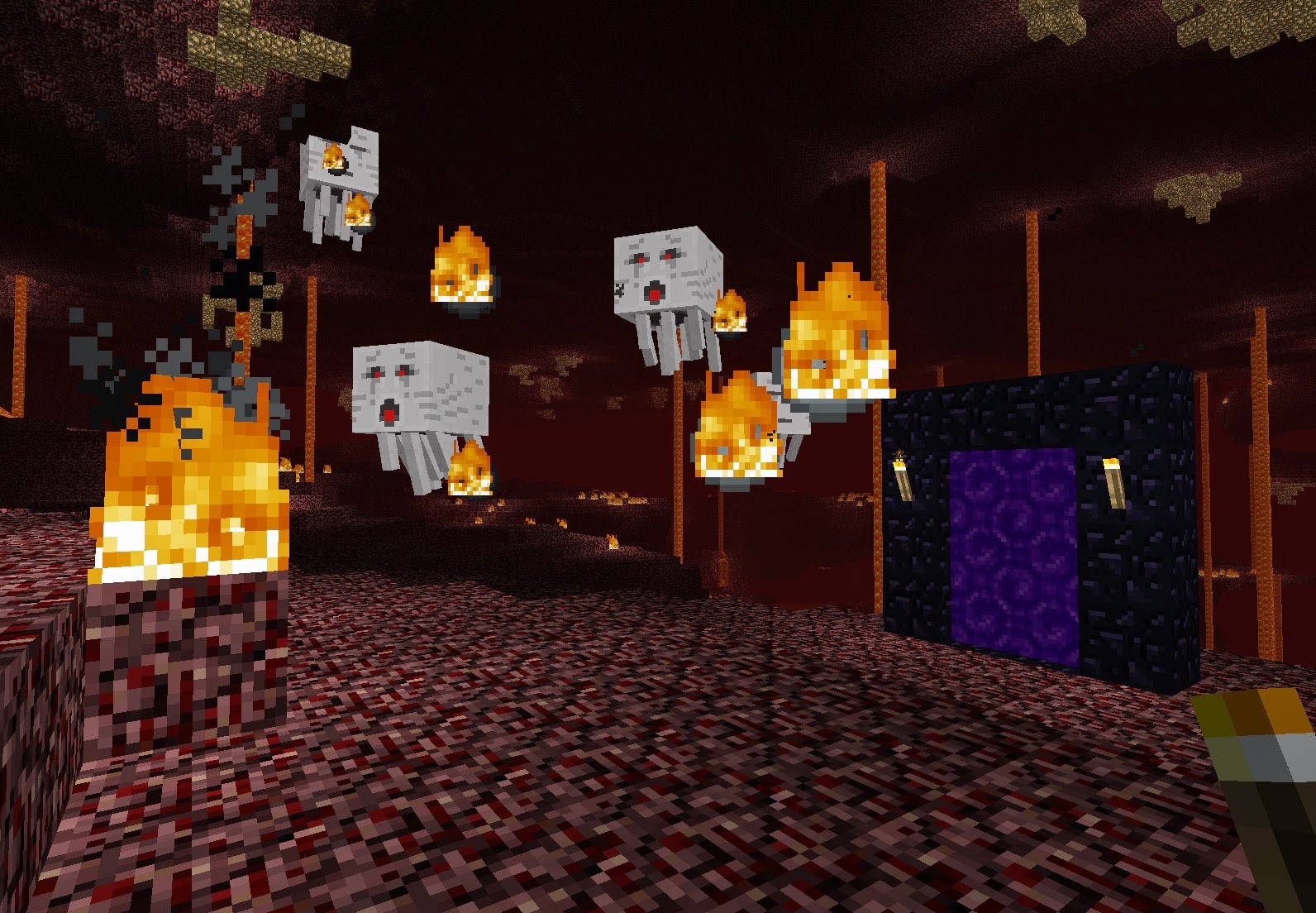 It even has it's own urban legends! Like Herobrine, a character said to actually haunt the game! He looks just like main character Steve, but has spooky  white eyes...He supposedly builds random constructions, and does weird things with your inventory items if you happen to bump into him. The creator of Minecraft, Notch, has denied he exists...but helps add fuel to the fire by stating in update logs "Herobrine Removed".... 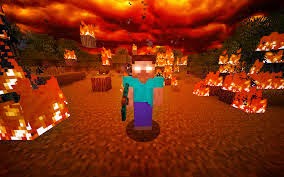 They've added a skin for your character so that you can pretend to be him and scare any young kids, nieces or nephews that you happen to be playing Minecraft with too, which is great fun! 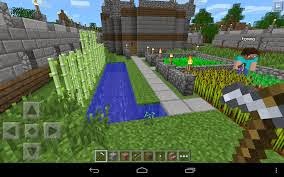 So there! Minecraft is survival horror! And it deserves a place on the list because of it, so I won't hear any moaning! Well, apart from those bloody zombies outside the door of my hastily constructed cabin....*shivers*....


So yeah, a bit too busy celebrating to get all the games done! But hope you all have / have had a Happy Halloween! As I said, I'll be posting the final lot tomorrow, so just because Halloween has passed, don't be a stranger! Day of the Dead is actually two days! So spooky stuff will be going on until Sunday! ;-)
Posted by Deadpan Flook at Friday, October 31, 2014