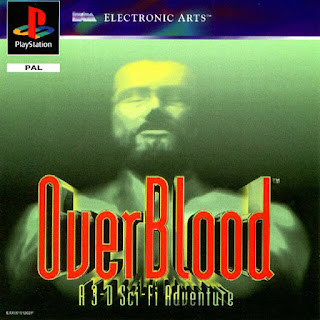 I don't know how many computer game characters start off their games having lost their memory, but it must be at least in the triple figures...and that is exactly the predicament that the hero of Overblood finds themselves in when you load it up on your Playstation... 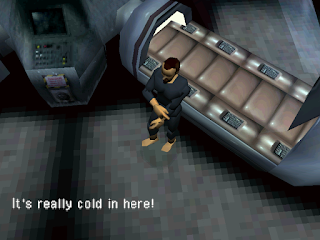 Waking up in a freezing spaceship from a cryogenic sleep, his first priority is getting a source of heat, and after hunting around he finds a jacket, and also a new friend in the form of Pipo the robot! After you get him started up and he gets done with his best R2D2 impression, Pipo can also be controlled, and turns out to be rather handy at opening doors and getting into spaces that our main hero (who has discovered his name is Raz) can't squeeze into... 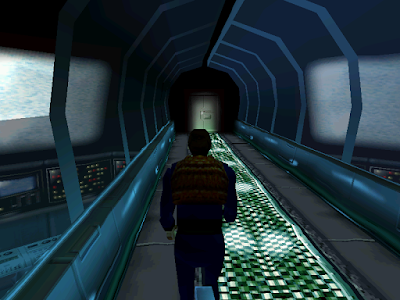 After wandering around the spaceship a bit more, it soon becomes apparent that something has gone very wrong and weird zombie-type creatures are wandering around, seemingly infected with some sort of virus...a virus that Raz also seems to have contracted... 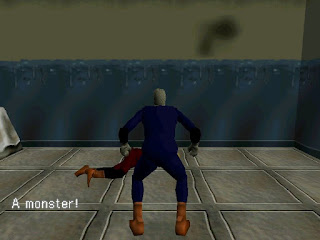 And so Raz, Pipo and eventually another amnesia-ridden playable character Milly, explore the ship to try and figure out what the hell is going on, whilst trying their best not to be killed by monsters, traps and the rather nasty environment they find themselves inhabiting!

Overblood was released only a few months after the original Resident Evil, and is quite similar in terms of tank-controls, viewpoints and atmosphere. It does have quite a few interesting differences all of it's own though. For starters, you don't have to stay looking at those spooky camera angles, as you can change the view to either being directly behind your character, or even a first-person camera that lets you move and look around from the characters viewpoint. 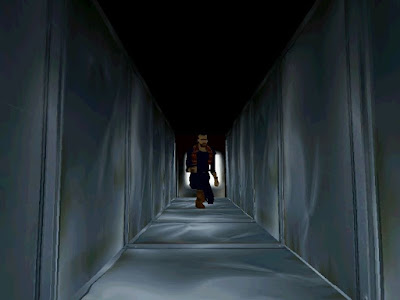 Also, rather than have you play through the game again as another character, the ability to swap between them is a nice feature that Resident Evil would borrow in later games. And instead of hunting around for ink ribbons, a voice recorder lets you save the game at any point that you're not in danger. 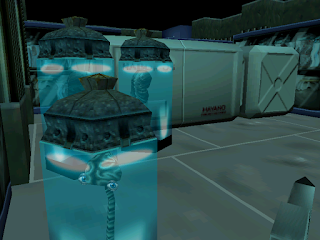 Unfortunately, the game has a couple of other ideas that don't work quite as well. The biggest problem is that a lot of the items aren't noticeable on the screen...so a key could be sitting on a shelf, but you won't see it sitting there, you'll only find it by searching the shelf! And you pretty much have to be at exactly the right part of the shelf to examine it! Needless to say, this is very annoying and makes you get stuck when you really shouldn't be getting stuck. 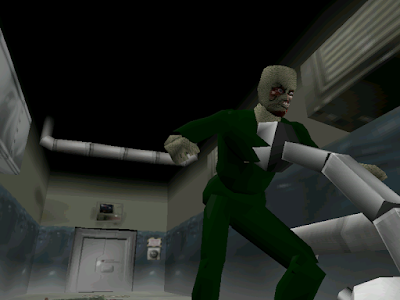 This problem is added to by the fact that if an item is on a lower shelf, or indeed on the ground, you have to kneel before the character will pick it up! I can see what they were trying to make it more realistic by adding this, but again it just leads to a lot of frustration when you realise you've missed something and need to backtrack.

Another issue is with the 'push' function not having a button, and every time Raz or Milly go near anything other than a wide corridor, they start trying to push things that aren't there! Again, this is a bit annoying, but you could argue that Resident Evil also had this issue, but to a much lesser degree. And some of the animations can look a bit daft, with characters looking like they're constantly pointing their hands, hoping that monsters don't realise they don't actually have a gun sometimes, perhaps.... 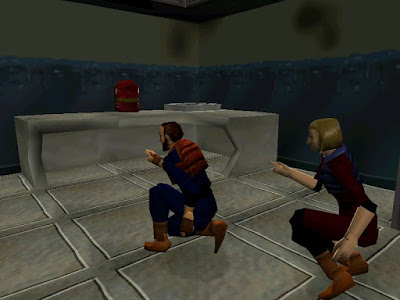 Having said all that, the gloomy, sci-fi atmosphere and odd story do mean that you'll want to keep playing, and when you add in the comical animations and some terrible voice acting that almost manages to top Resi  for cheesiness, it's a survival horror game that does show some rewards for perseverance. And when you finally get to grips with the mechanics of searching eveywhere and everything (and using the internet when you get really stuck) it actually becomes quite enjoyable!

Worth a look then, and probably a lot better than most folks these days give it credit for!

Please remember to go and check out the other groovy ghouls and boils that are taking part in the Countdown To Halloween, as they're posting lots of cool stuff on their blogs too!

Just click the pumpkin below to be taken to the hub, where you can access all of the Halloween horror from!