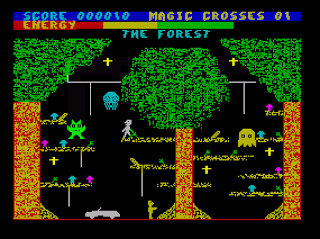 Another game where we have to rescue some poor girlie from the clutches of evil! This one seems to be based around Michael Jackson's Thriller music video, and the failure to have a licence for the source material doesn't seem to have stopped Mastertronic from making a game around it anyway! Apparently they did panic and recall the C64 version as they felt the music was too similar to Jackson's groovy graveyard hit, but a few copies made it out into the wild with David Dunn's original tune in place...

It's a platform collect-em-up which sees you visit the various scenes of the video (Forest, Cinema, Ghetto, Graveyard & Mansion), negotiating platforms and ropes whilst dodging the ghouls and collecting crosses to magic yourself to the next screen! Eating blue mushrooms gives you energy, but chomp on a pink one and you'll lose energy as their poison fills your gut. 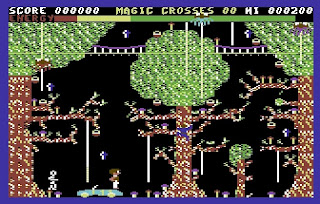 This was among the first Speccy games I ever owned, having picked it up with issue 70 of Crash Magazine...and as such I probably spent a bit longer playing it than I would have if I had picked it up later on. It's quite a tricky little platformer, and I think I've only made it as far as the 4th screen once ! I recently tried out the C64 version (pictured above) and found it to be a little easier on the first level, but just as tricky after that. It's got a nice little tune, but I don't like the graphics as much...you lot can judge for yourselves from the screens above... 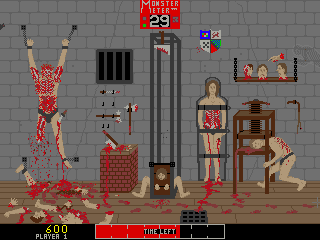 Next up, we have a game called Chiller !

"Hang on," I hear you cry..."Didn't we just look at Chiller?" Well this has nothing to do with the Mastertronic game, and is in fact an Exidy lightgun game from the arcades!

And a grim little game it is too, with you filling the blood-drenched boots of an unseen torturer, inflicting hideous wounds upon helpless victims chained up in dungeons, including crushing their heads with vices or ripping their bodies apart with racks.....

Its Grindhouse style leanings also allow for some gratuitous nudity on the last level, with you being able to shoot the clothes off one poor victim before finishing her off with another couple of shots.... 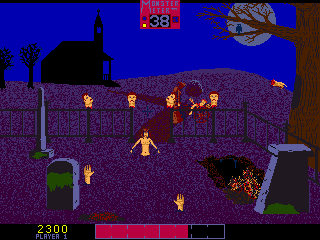 Despite the rather gruesome scenes and unnecessary violence towards the poor characters locked into the various devices, there is quite a bit of guilty pleasure involved in shooting the switches and blades which cause the untimely demise of them all. The ghosts and ghouls flying around the screen look a bit daft and help lighten the tone a little, but as one of the truly gruesome games on this list, it might not be for everyone!

Perhaps the most surprising thing about the game is the fact a version was released for the NES, although it was of course edited, with a lot of the random severed body parts removed, no nudity and bizarrely, a nun and a baby carriage replacing a monk with a wheelbarrow full of body bits!?!? They also tried to make the violence less gratuitous, and claimed that the victims were in fact "undead monsters".....I haven't played this version yet unfortunately, but as a proud owner of an NES Zapper I am going to keep an eye out online...

Eeww! Maybe that was a bad choice of words...yuck! 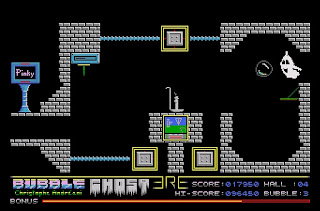 Moving swiftly on fom all the blood and guts, we have something a little less gory. A groovy little French game where you have to help a ghost move a liccle bubble through some hazardous Haunted House environments, trying not to let it burst in the process...

Candles, walls spikes and a load of other obstacles stand between you and your final destination, and you need to move your bubble clear by clicking the ST's mouse and its buttons to position yourself, and then clicking a button on the keyboard to blow it along on its way! 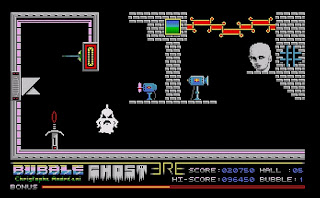 It's the ability to manipulate the obstacles with your ghostly breath that makes this game really great though! Candles can be blown out for instance, and switches flicked....it really is a pretty funky feature, and gives the game a great deal of charm! The little ghost's animations and angry fist shaking when you burst his bubble also add a nice touch..

Progressing through the game becomes an addictive task, and you'll find yourself trying again and again after many failed attempts to get past the next level. It really is all a huge hoot!

And, as I've just discovered, there are versions for Amiga, Amstrad CPC, Commodore 64, DOS, Apple IIGS and the Game Boy too! And even a game called Soul Bubbles for the DS, which seems to be heavily influenced by it, so if you don't have access to an ST or can't be bothered with emulation, then maybe you could check out some of those?

Back to 19th century London now, as we get to enter the mind of the greatest detective of them all, Mr. Sherlock Holmes! Apparently some chap has been going around bumping off some ladies of the night in Whitechapel, and Holmes and Watson take it upon themselves to find out who this deviant is...

All of which is fine of course, as these horrendous real life crimes happened in 1888, and are thus morally fine to revisit for the sake of entertainment kicks! (Ahem! * Cough *)

Off to the scenes of the crimes we go then, and indulge in some crime re-enactments and speedy deduction using a rather nice interface to go about it all ! Filling the shoes of Holmes as he tries to work out how the crimes happened makes for some interesting gameplay that will keep you gripped to the task of tracking down the monster who committed these terrible acts!

What a pity then, that to get to these great crime investigation bits you first have to go about a serious of mundane tasks for the residents of old London, to-ing and fro-ing between locations for what seems like forever and listening to some horrendous voice acting in the process.

The game is a port of the 5th in a series of PC adventure games, and it comes with a lot of generic point and click type stuff that gets in the way of the main adventure. To give you an example of the sort of things you can expect, the very first thing the game has you doing after leaving Baker Street is retrieving a policeman's bag.

Now the bag could be in the grounds of a boarding house, but before the landlord has a look for it he ask's you to try and see to it that a tramp lurking around his property at night is removed. His neice stays in lodgings nearby, and so you go to ask is he could perhaps stay with her..But she tells you that although she's happy for him to stay, the guy is sick, so you have to sort out some medicine...Off you trot to the doctor before having to return to all the locations in reverse to tell all the people that the task they wanted done has been achieved...and all this just to get a bloody bag for a policeman!

Despite all of the crappy bits, roaming around the filthy streets hunting down Jack the Ripper can be fun, and if you think you can bare wandering around for hours doing the legwork to get people to chat to you, by all means give it a bash ...I just wish they had stuck to the crime scene investigation stuff throughout....

Fed up of endless zombie games where you have to survive wave after wave of the undead? Tired of avoiding the zombie plague and starting to wonder what would be so bad about just succumbing to the inevitable and becoming a zombie yourself? Then Stubbs the Zombie is the game for you!

In this 1950's America-set tale, you control Stubbs, a chap who has recently returned to life and is out for revenge on the folks who put him in an early grave. Punchbowl, a futuristic city is being built atop the place where you were buried, and so you decide to explore and see if you can hunt down the people responsible for your death.

Being a zombie, the main focus of the game is to try and turn everybody else into the undead. In order to help you achieve this, various bits of your body can be used ! Stubbs' hand can be detached and sent off to leap on someones head and control their brain...his gut can be flung as a grenade...his head becomes an exploding bowling ball...and his farts are bad enough to stun enemies, making them easy targets for a bit of brain breakfast!

The members of the public you infect aren't quite as well evolved undead creatures as your good self, and so require a bit of herding to get them to go where you want them too...you can shove them around and if you walk a bit away from them, a whistle will have them regrouping and following the noise to where you are..making it easier to take on the soldiers and policemen who are out to put a stop to your mission.

There are some vehicles to be found too, and as this game was created using the same game engine as Halo, they all control pretty well and are a nice change to shuffling around. Sound too is superb, with versions of fifties songs sung by new bands and generic B-movie type sounds playing elsewhere! The enemies do get a lot tougher as the game progresses, but it never seems unfair and you should make steady progress..

Causing zombie chaos is fantastic fun, and the B-movie atmosphere adds a lot to the appeal of the game. It doesn't take itself too seriously at all, and as it was created before the current saturated zombie genre took hold, you could say it was before its time too..and it still makes for a refreshing change! I reckon it deserves a sequel on current gen!! Lets start a petition or something!!
Posted by Deadpan Flook at Saturday, October 22, 2011