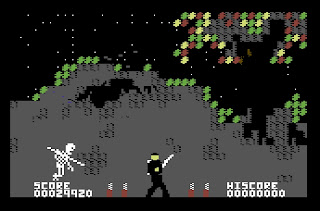 Crikey! Less than a week to go and we're not even at 50 yet! That means we've got a lot of games to look at this week, so I hope you're ready to get your fear-filled thumbs ready for action as we rush through this next lot.... 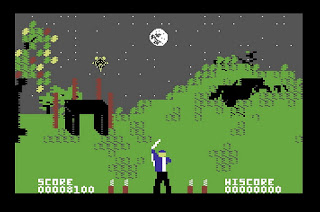 A creepy composition of music sets the tone for this classic, which is reknowned for giving 8-bit gamers nightmares back in the early eighties! Armed with a bow and four quivers of arrows, you enter the Forbidden Forest to hunt down the evil Demogorgon! All manner of creatures try to put a stop to your quest and you'll need to keep your wits about you to survive... You have to load up your bow before you can fire it, and this adds to the tension as you have to make sure not to stall too long, or you'll be eaten by spiders or crushed by a rain of frogs or whatever! Lining up the shots can be tricky too, but when you hit the target you'll feel like dancing with joy....and that's exactly what your little character does at the end of every level !

The atmosphere the blocky graphics and moody music give this game is surprising, as looking at the static screens you could wonder how the game could freak anyone out...But after you've run for your life through the woods being chased by skeletal warriors, you'll start to understand!

A brilliant day-to-night effect also helps the tension build, and you feel increasingly spooked as the daylight fades. The scariest bit of all is, of course, the Demogorgon itself...and as the lightning storm lights up it's horrible form, any horror game fan will be glad they entered this particular weird little wood.... 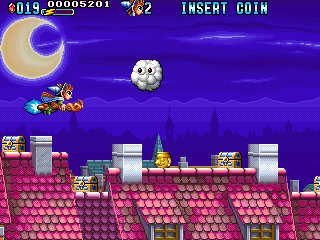 Just going to rush right through this one! It's a nice little horizontal scrolling shooter, but instead of the spaceships that usually fill such games, you play as a little witch shooting lots of ghostly enemies over moonlit rooftops, mushroom kingdoms and the like!

Nicely presented, decently controlled and totally unoriginal, it's a nice enough way to kill an hour or two and suitably spook-filled for Halloween! Go give it a bash! 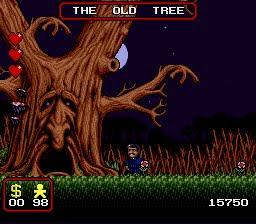 Based on the 1991 film rather than the TV series, this sees you running around the Addams' mansion trying to rescue the other family members , who have all been captured by the evil Abigail Craven and lawyer Tully Alford and imprisoned in various different rooms. You'll have to battle past the other inhabitants of the mansion...ghosts, monsters and other weird things...who apparently don't like being intruded upon!

It owes a lot to Super Mario World, and has you bouncing off the bonces of the baddies to defeat them for most of the game. Being Gomez though, you also get to indulge in a bit of fencing if you can find a sword..and even fly around with a rather dapper helicopter-styled Fez! 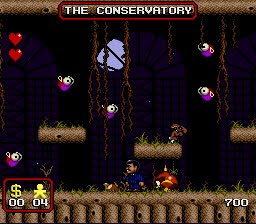 And unlike Mario, Gomez can choose what order he tackles the levels in..so if he comes up against a particularly tricky switch-hitting puzzle, he can leave it until later as he goes off and tries to rescue another family member instead!

It's a really funky platformer, and one of my favourite games of all time! It's filled with great graphics, groovy tunes and puzzles that although frustrating at times, will never see you stuck completely...if you've never played it, you really are missing out!

The Megadrive/Genesis version is pretty much exactly the same, and versions that had similar themes but different layouts were released for all the major home computers at the time..so yeah, go get your freak on, choose your platform and get rescuing those Addamses!!

The less I tell you about this game, the better the experience you'll have with it..All I'll say is that you play a chap called Daniel, who can only remember his name, where he's from...and that somebody or some...thing...is after him!

The game is a 1st person adventure, but you don't get any weapons...instead, using the mouse you open drawers, pick things up, turn wheels, etc... It works very well, and I can't help thinking this would be great on the Wii ! Anyway, you creep about in the dark going slowly more insane, trying to hide from whatever it is that's chasing you and find out why you've lost your memory and what the hell is going on.

To stop going completely mental, you have to find tinderboxes to light torches or find oil for your lamp in order to get into the light and feel less gloomy. Of course, if you stand about in well lit areas though, whatever is out there will be able to see you... 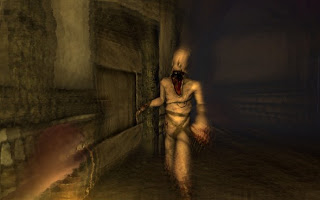 Things move by themselves, all sorts of freakish sounds fill the halls and you can hear Daniel whimpering as he hears or sees things that would make anybody question whether they were losing a marble or two...and there appears to be more than one type of thing lurking about in the shadows!

It's very atmospheric and chilling, and genuinely scary in parts! I'm loving every minute of it so far! Not having the necessary spec to run this on my PC, I've been playing this one via the new cloud gaming app, OnLive . Although it's far from perfect and broadband needs to get a lot better and faster for cloud gaming to really take off, it does allow people like me with crappy computers to play the latest releases in a slightly rubbishy way (the graphics glitch every now and then, and obviously lose a bit of quality, given that they are being streamed from a different computer miles away!)....

Anyhoo, the game is ace and I'd love to tell you more about it, but it would only ruin the experience! You should probably stop reading this and go and play it immediately! Just remember to come back again once you're done, and see what else is on the list.... 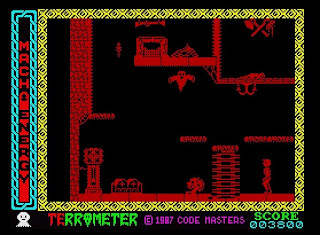 This one's a bit tricky! Didn't get as far when refreshing my memory for the blog as I can remember getting back when I played it years ago! Maybe I'm becoming old and rubbish??

Anyway, the plot...Professor Twilight, owner of the not-at-all-obviously named Nightmare Mansion, offered a substantial reward for anyone who could clear his mansion of all the many ghouls, ghosts and zombies that have moved in. Three days ago, your brother, the amazingly named Chuck Studbuckle, took up this offer and since entering the mansion hasn't been seen nor heard of ! Being his brother (and probably also due to the fact that he still owes you a tenner) you decide you'd better go in and rescue him!

Entering the mansion, you've got to move from room to room looking for Chuck! Vampires, severed heads, zombies and the like will all try and stop you.. and as they do, your rising terror is measured via a thing called the Terror Meter! As this rises, you lose vital Macho Energy, and so you should try to kill these crazy creatures as soon as possible and move to the next room! 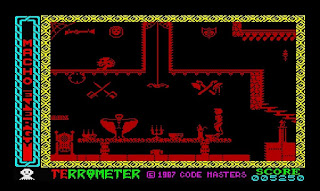 Lifts to other areas of the mansion are activated by collecting flashing objects, and any energy you lose can be replenished by drinking some bottles of magic potion someone has left lying around. To shoot the ghosts, you have to hold fire..this lets you move a crosshair around and get the ghouls in your sights to destroy them! This can be very fiddly, and is probably what makes the game so bloomin' tricky...

But....if you can find a second person to play this with you, they can control the gun while you control the little ghost hunter, making it all much easier and far more fun! The graphics and sound are all perfectly decent for a game that only cost a couple of quid when it came out all those years ago, and I suppose if you can get the help it's probably still worth a go..

Unlike most Speccy titles though, if you want to play this one legally you'll need to find a proper copy and load it up on a real Spectrum..It's by Codemasters, and they don't like people playing stuff they own for free, so it's not available in the World of Spectrum archives...Grumpy buggers, those Codemasters chaps!
Posted by Deadpan Flook at Tuesday, October 25, 2011