Only 9 days to go, so lets not waste any time and get right on with the next lot...

A lovely animated intro tells us that in this game, Frankenstein's monster has risen once more from the grave and decided that he needs a new lady friend. Popping along to the nearest village, he indulges in a bit of arson and kidnaps the beautiful Emily ! Off you trot then, on a quest to hunt the fiend down and rescue the lady before she becomes the next Bride Of Frankenstein....

The game is a side-scrolly hack and slash affair, and adds a little exploration by letting you enter buildings to try and find extra items and power ups to help you out. These add things like projectiles that fire from your club, or extra life potions..the usual sort of stuff! 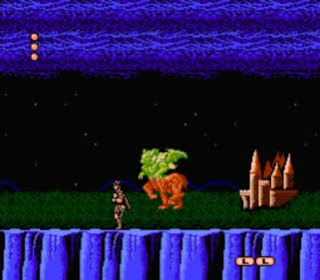 It makes a fairly decent job of it all, and it should have you giving a good attempt at ploughing through it. There's a good selection of baddies, and the backgrounds and music create a nice spooky vibe throughout! Be warned though, that it can be pretty tough in parts and not always for the right reasons....

There's some sloppy hit detection during battles and a couple of annoying platform jumping sections that are really frustrating, but if you can stop yourself from hurling your controller at the wall, you will get past them and get back to the hunt for old bolt-bonce! The boss battles can be difficult at first too, but like all the best boss fights, it's just a case of working out the right places to stand or the right way to attack...

So yeah, why not go and see if this one lights your flaming torch!

Yes, yes...it's another game with zombies in...but this FPS does do things a bit differently! Although you can play it as a Single player game, the real way for this to be enjoyed is as part of a team of four!

As usual, a weird chain of not particularly obvious events has resulted in a zombie apocalypse, and the zombies are of the newer, fast, running type and not the slow, shambling, easily escaped monsters of the old days...so you'll have your work cut out!

You play as one of a group of survivors who have so far escaped the sudden urge for brains or loss of the odd limb. You can pick from grizzly old war veteran Bill , biker boy Francis , office worker Louis and student chick Zoey...but there isn't really any difference in play whoever you pick, so it is just a matter of choice.

You have to battle your way through zombies that the game randomly flings your way, moving from safe house to safe house across varying locales and encountering quite a few different obstacles that need a little more brain work and/or co-operation to get past.

You'll also need to keep an eye out for the "Super Zombie" types...undead characters who have evolved beyond just running and chomping. There's the Smoker , who'll try to drag you close with his rather extraordinary tongue...the Hunter , who'll leap from the shadows and attach himself to your torso whilst ripping away your ribs...the Boomer , who will explode in a gloop of zombie-attracting, vision-obscuring pus all over your poor character...the Witch , who sits sobbing in a corner until she spots you or your torch and decides to come say hello to your innards...and last but by no means least, the Tank , who lives up to his name and takes a load of ammo to take down as he flings cars and bits of tarmac at you before attempting to pummel you to pavement-paste!

There are weapons and health boosting items lying around to give you a better chance, and again these are often randomly placed. This, and the random way the game decides which enemies to appear and when, are a good way of keeping replays of Left 4 Dead interesting, as otherwise the relatively small choice of four different scenarios with 5 levels each could become boring very quickly.

With four real online players, the game can be a real blast. You really have to stick together to get anywhere, deciding who'll do what and where everyone will be positioned, and branching out on your own will see you pushing up daisies in no time. If one of you does bite the dust, you can re-enter the game a bit later, so long as at least one of the others survives long enough to discover you hiding in a cupboard... 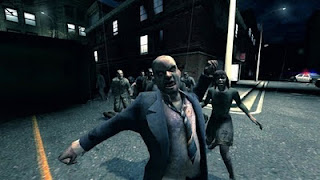 If you're playing solo, the AI is pretty awesome and shouldn't see you have any real difficulties apart from the other team members deciding to stand in your way every now and again, but they do move swiftly when fired upon..Oh, and occasionally they'll make a bad choice in trying to revive you whilst too many zombies are still kicking about, but I've seen human players make similar bad choices too!

It's all a huge load of groovyness, and I could talk about it for hours ( I haven't even mentioned the other game mode where you can fight as the super zombies against another online team of survivors! Or the Survival mode, where you have to fight as many zombies off as the game can fling at you!) but time is short, so I'll just skip to the end and say that you must play this game if you have any interest in zombies or first person shooters at all !! 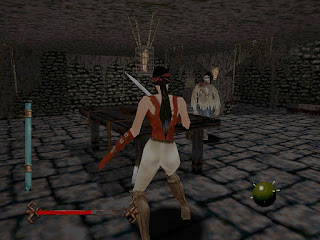 Adam Crowley is a bit of a git! He's only gone and released a nightmarish Transmortification virus on old 19th Century London town, and it's turning all the cockneys into hideous, deformed creatures of the night! Unlike Eastenders though, it's going to take more than a cup of tea to sort out this load of slobbering, gibbering, undead moaners....

Step forward our two brave heroes, Father Ignatius Blackward , a priest with more than a little knowledge of the occult and magic...and Nadia Franciscus , a vengeful daughter out to put a stop to Crowley's plans and make him pay for her immunologist father's death!

Third-person, hacky-slashy, action-adventuring is the way forward...through 18 levels of London fog, creepy cemeteries, stinky sewers and the like. Switches must be flicked to open gates, holes in floors jumped over and all manner of creatures hacked limb from limb using the various items lying around and some funky fighting moves made possible by using different button combos... 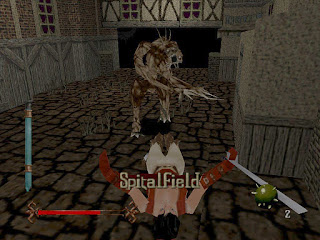 You also have to make sure and keep killing the various fiends and keep your adrenaline meter high, or you'll end up succumbing to Crowley's virus yourself! This adds a bit of urgency to the game, and also makes it a bit more difficult...

Roaming about in the London fog and creeping through rat-infested sewers makes for an atmospheric adventure, and the John Carpenter-esque soundtrack and random spooky sounds also help make you feel favourably freaked out!

There are sometimes a few camera issues, and the controls cans occasionally be a bit unwieldy..and like other PS1 games it's beginning to show it's age a little..but it still stands up as a decent and fun example of the genre! And you could always try the slightly better looking N64 or PC versions, the N64 one being where these screens are from! 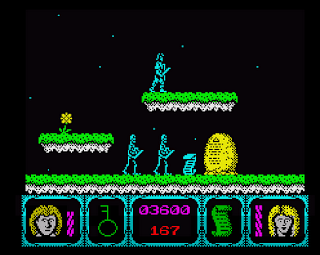 This is another game that has relatively recently been brought to my attention. Never having played it back in the day, it came up as a recommendation at World Of Spectrum when I was asking around last year for Halloween type games. I had a quick go, but only went back to playing it properly this year for the blog....

Undead beasties have appeared and run off with a princess, so you have to fight your way through the forest to rescue her and retrieve some ancient scrolls which will apparently send off all the undead back to the putrid pits they emerged from. Armed with a sword, you hop about the platforms smacking skeletons and avoiding evil hoodies who appear and fling fireballs at you... 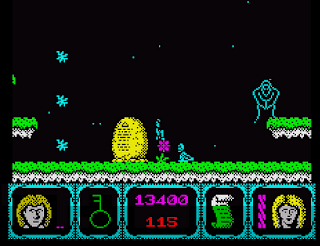 I haven't got very far at all in this, 'coz it's bloomin' difficult! You only get one life, and there doesn't appear to be any way to get more health. I managed to pick up a few bits of scroll, but those annoying monks or whatever they are keep appearing, lobbing those fireballs at me and wiping out my health instantly!

As such, I can't really say whether or not it gets any better...I was slowly making progress, but in the end I gave up as I was just getting too frustrated at dying all the time! It does have a nice creepy tune at the title screen though, and doesn't look too bad...but nope, just too difficult I'm afraid!

The Thing meets Resident Evil on a boat!

Hmm..that was easy....right on to the next lot.......What? Not enough information? I thought that summed it up pretty well, but fair enough...

You take the role of Tom Hansen, ex-soldier and now under the employ of the US Coastguard, as he goes to investigate a Russian whaler which a SEAL squad has mysteriously disappeared on whilst trying to determine it's cargo. It doesn't take long to discover that some strange parasitic creatures called "Exocells" are using the crew and any other living creature they can lay their tentacles on as host bodies...and as a food supply too!

But where did these creatures come from? And what were the doing on a whaling ship in the middle of the Bering Straight?

This game is a typical survival horror type affair, with you creeping around dark corridors finding notes from unfortunate victims of the bizarre events, and constantly getting spooked by fetid foes who seem to be unhappy with you being around. It even has a similar camera angle to Resident Evil 4, with the view sitting behind your shoulder..

What makes this a particularly groovy take on the subject though, is the decision to set the opening part on a boat in the middle of the ocean! As a storm lashes the ship, you'll have to deal with keeping your footing as it bobs around and watch out for waves or hanging chains that are swinging about trying to knock you off your feet!

The seasick inducing swaying of the ship gives the game a refreshingly different atmosphere than the usual dark tunnel or mansion environments, and if you're a fan of survival horror, you'll enjoy the change of scenery!

Other than that though, it's pretty good but standard stuff. You'll have to do the same running back and forth, hunting for ways to unlock doors and solving not-too-difficult puzzles to get past certain enemies or obstacles...as I say, the usual stuff. All in all though, a great game for fans of the genre !
Posted by Deadpan Flook at Saturday, October 22, 2011