Argh! Only 14 days left until Halloween! And I might be getting a job this week, so I won't have as much time to devote to this list before we get to the night itself! This means I'll have to rattle through them from now on, and try to only give them a few lines of blah each and hope it's enough to let you know whether to seek them out or not....

Well, I say this in theory but I'll probably find myself still blethering on far too much about them and still not having enough time..hehe...but for now let's just see what the next 5 are!

Funky 3rd Person shooter that really makes you feel you're playing a B-Movie! Giant ants, spiders, robots, spaceships and Godzilla-type monsters all try their damnedest to invade and only you and your Earth Defense Force can put a stop to it!

It lacks a lot of the shine of most modern titles, and definitely feels like a budget game...but the gameplay is superb and although a bit repetitive after a while, if you play in short sittings you should find plenty of enjoyment blasting the bugs through the upcoming long winter nights!

Speaking of budget games, I picked this up for a fiver...but I'm not entirely sure it was worth the price! A 1st person shooter that sees you hunting all manner of beasties after they kill your wife and family, it's a game that has bags of atmosphere but just falls completely apart when it comes to gameplay.

It feels a lot like one of those cheap FPS game you can find loads of on XBLA, where you shoot an endless amount of identical enemies but don't really have to, as you can just run past them without them giving you too much trouble.

Having said that, I've yet to make it past the 2nd level, which sees you trying to sneak past some vampires who seem to be deaf and blind at some points, but then psychic at others and notice you immediately.

Still it does have an excellent title screen with groovy music playing while a camera zooms over a graveyard...and an eerie, dreamlike atmosphere when you're playing through it....and I really want to like it, but for the price I can't recommend it! If you can find it for 50p though, then by all means give it a go!

More giant bugs in this apparently classic, sub-game filled Cinemaware adventure! You take on the role of a Doctor Greg who has recently moved to the small, middle-of-nowhere town of Lizard Breath. A meteor falls nearby one night, and strange things have been happening in the town since... Switchblade fights, house fires, detective work, games of "chicken", daring hospital escapes, crop dusting, army tanks and of course, giant ants! All of this is in this game, but having only recently discovered this via emulation and therefore being a newcomer to this title, I've yet to experience most of it...

What I have played has been excellent, atmospheric, well presented fun..and I've been assured it's one of the best Amiga games you can get....so this is one that I'll be giving a bash myself this Halloween!

Bit of an oddity this one! You control some weird little goblin chap as he trys to come first in the Mystic Marathon, which I assume must be part of some sort of Fairyland Olympics or something....

What this means, is that you basically have to get from one end of the map to the other before all the computer controlled goblins, via any means possible! Lots of shortcuts and traps lie between the start and finish line, and all sorts of weird characters are out to stop you and the other racers too.... 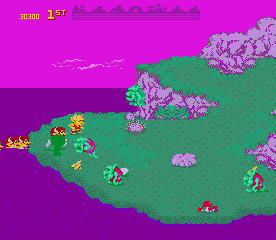 Ogres will try and stomp on your head, trees fling apples at you and mushrooms dance around trying to trip you up...but if you can enter one of the big stone mouths, he'll pop you out via another rock-faced chum a bit further down the map!

This is a bloody difficult little game though, and I've only made it as far as the 2nd race....anything you do wrong will pretty much cost you the win, and it can be frustrating when you get stuck at one of the traps. Still, it does seem to have you getting a bit further the more you play, so it's alright for a bit of fun every now and then when you fancy being a marathon running goblin...which is every other day for me! 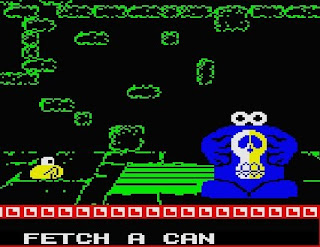 Trap Door! Yay! I LOVE Trap Door! For those of you who are unaware, Trap Door was a groovy clay model animation series back in the eighties. It focused on the antics of Berk, a big blue monster who was living in a big spooky castle and working for the unseen " 'im Upstairs "...

It also featured Boni, a talking skull and Drutt, a weird spider thing...and told of the three chums' adventures with the Trap Door and the things which lurked in it's freaky depths! In fact, why am I wasting time talking about...here, go watch this episode....

Right, now that you've watched that (and come back from looking for more episodes on Youtube) you should be ready for everything this ace ZX Spectrum has to chuck at you, because getting 'im Upstairs food ready is what it's all about!

He'll shout down an order, and as Berk you have to work out how to go about getting what he's after, using all the stuff lying around to collect and make it! Oh, and of course you'll have to open up the Trap Door to see if it has anything down there to help too! Just make sure you let out the right thing... 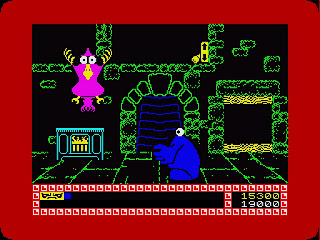 This is a great game, and really captures the feel of the cartoon...largely thanks to Don Priestly's huge graphics! Working out what monster to use when and where can be tricky, but it's a joy to try and get it right. The animation of the characters is spot on, and although only a few screens long, the game has loads for you to do! Play it now! Go!