4 days to go, and 50 games left to talk about! It is possible? Of course..if I can call up some sort of supernatural force to give me a hand...

But my little Gruesome Game groupies, it won't get done unless we crack on with the next lot! Let's see what we can whip up here.... 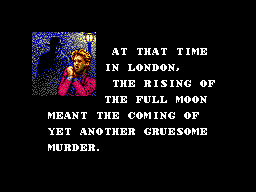 19th Century London was a creepy place, of that we can be sure...and we've already visited it at least twice so far is in this list, one of which had us hunting a certain chap called Jack...well, if this Master System release is to be believed, it turns out Mr. Holmes might have been wrong in going after just one fellow !

According to this game, the murders have in fact been committed under the orders of a certain creature of the night, known by many as the Master of Darkness! Yes, old fang-face Dracula has popped up again...and as the dashingly heroic Dr. Ferdinand Social, you must go on a platform-hopping quest to destroy the fiend ! 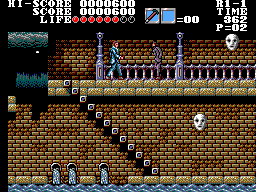 This is basically the Master System's answer to a Castlevania title, and it does a splendid job at emulating all the stuff that series is famous for...nice presentation, deadly platform action, hidden items, a variety of freakish enemies to defeat, and of course Dracula....all are present and very nearly correct!

Special weapons can be found by breaking open the masks which litter the levels, but you can only carry two at a time..so if you prefer a gun over bombs for example, be sure not to go near the bomb icons as the weapons are automatically replaced with whatever you pick up..

Levels are varied (So far I've been to the Thames, a Wax Museum and some sort of mansion or castle) and although the music can sometimes get annoying, and it can get a little tricky in parts, it's a nice little alternative to a proper Castlevania title and well worth a play! 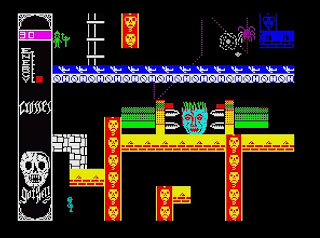 Apparently, the plot for this has you trying to guide a guy you once told to go to hell back out of the flaming furnaces of said nether region, as he obviously took you a bit too literally and did indeed go on a jaunt to the domain of demons.

It actually has a pretty cool interpretation of Satan's pad too, with a lot of crazy stuff all happening on screen at once as you try to guide the little chap through some hazardous maze. You'll see people getting their heads squished with spikes or sawn through the middle, and touching anything at all seems to drain your life essence away very quickly! 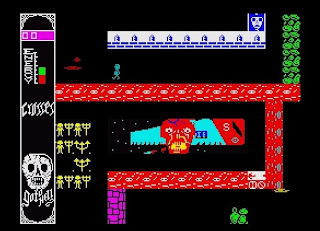 Far from perfect, and featuring graphics which could have come from the pits of hell themselves, this still somehow manages to be quite atmospheric and, dare I say it, fun...It's bloomin' difficult, but playing this will be much better than watching yet-another-repeat of the BBC's A History Of Horror with Mark Gatiss on Halloween night...... 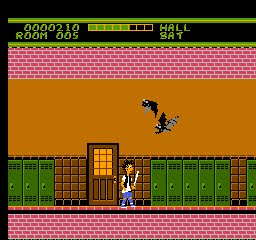 Spike O' Hara, or as the player..you, is having to fight his way through school to try and rescue the cheerleader love interest, Samantha, from all the ghastly ghouls who have appeared after you brought a skull you found lying around in a graveyard to show to your teacher. Naturally, it was a particularly nasty skull with baddie-summoning powers, and so now the schools infested! 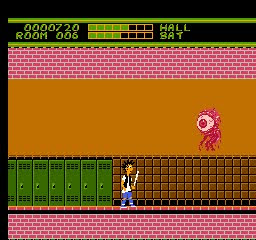 I think I must be missing something with this game. Reading reviews online for it before playing, they all quite liked it and mentioned picking up different weapons and seeing lots of different enemies...but after wandering around a bit, I found myself entering lockers which seemed to do nothing of any use whatsoever, fight endless one-eyed monsters, have a couple of run in's with green dudes who lob their head at you and get bothered by some bats....

But that was it...screen after screen of very similar graphics and gameplay, and nothing much there to hold my interest at all.. Maybe I just haven't given it enough time? Maybe my version is broken? I don't know, but what I played I found to be very boring and a bit bland...I found the un-released Zombie High to be much better for spooky school shenanigans!

Meh! See if it sends shivers down your spine, I suppose.....


Vince the Voodoo Doll has been awoken from life as a pin-cushion by way of some carelessly dropped Voodoo dust. His mistress, Madam Charmaine, wasn't so careless as to drop the dust though...nope, it was her kidnappers, two thugs sent by the evil Kosmo the Inscrutable who she happened to catch in the act of stealing the aforementioned powder!

Kosmo wants the dust for his own devious desires, and has long sought the source of Madame Charmaine's powers. Thankfully, Kosmo's clumsy henchmen carelessly littered the place with the dust, and the now sentient Vince uses his psychic link with Madam C to get advice and directions from her, to send him in the right direction for a rescue attempt! 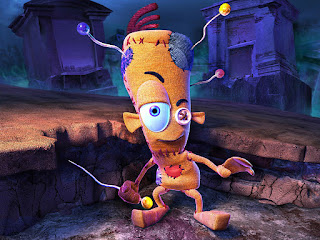 Picking up various voodoo icons gives Vince the ability to perform some horrific injuries upon himself, which then transfer to any enemies in the vicinity! Sometimes you'll need to find specific items to get past puzzles or enemies... a Jazz musician skeleton won't let you into the museum until you play him a tune, for instance...and for that you'll need to work out how to get a saxaphone!

Various other collectables are hidden away on the levels to get you exploring, and there's plenty of stuff to keep you entertained whilst you make your way to free your mistress. It all makes for a funky, funny and freakish adventure which will have you pinned to your seat for the duration! So you should definitely do do Voodoo even if you definitely don't do do Voodoo normally...or something....


Castlevania is a long-standing horror series which debuted way back on the NES and had lots of hit sequels on various different systems over the years, with Symphony of the Night on the Playstation considered the series high-point...

Things were a bit different when the series tried to move from being great 2D platformers to modern 3D arcade adventures though. The N64 and PS2 had some decent attempts at making a good update, but somehow something was missing and Konami couldn't successfully produce a 3D sequel that was truly worthy.

Having played through this latest release on the 360 though, I'm happy to say that finally, in getting Hideo Kojima to throw his weight behind it, Konami have achieved that seemingly impossible task!

For a good look at what to expect and a thorough examination of the plot, you can watch the video below, but for those in a hurry or those too lazy to bother, here's a brief rundown...

Gabriel has lost his wife to an evil sweeping the land, an evil brought upon by the so-called Lords Of Shadow. The same evil is stopping the dead from crossing over, their souls trapped in a kind of limbo....Gabriel has heard talk of a mask which can bring people back from the dead, and it just so happens these Lords Of Shadow all have a piece of it..so off he goes on a quest to defeat the Lords, join up the mask, resurrect his girlie and generally save the day!

Along the way he receives help from Zobek, another knight from the same order as Gabriel, and the old god Pan, who helps Gabriel come to terms with what he must do to achieve success. And there are some terrible things which must be done...

The game basically steals sections from all the best games of the last few years, but successfully manages to piece them back together to make for something all it's own...there are platform sections that will have you thinking back to Prince Of Persia, Titan battles that owe a lot to Shadow Of The Colossus, hack-em-up sections very similar to God Of War...you get the idea!

Presentation is superb too, with a great voice cast including Patrick Stewart as Zobek, who narrates the tale...and Robert Carlyle as Gabriel. The graphics are simply amazing, with some of the most realistic settings I've seen in years...whoever designed this game obviusly visited real forests for instance, as the ones in this game feel truly organic...and it has a very mystical, fantasy vibe throughout which really captured me.. 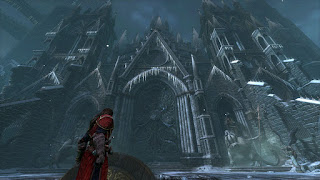 I love the way they've re-imagined a lot of enemies from previous Castlevanias too, and if you're paying attention you should find plenty to keep you happy if you're a fan...but there appears to be one particular enemy missing...a certain Master Of Darkness shall we say...well, hopefully without giving too much away, if you stick with the game to the very end, you shouldn't be disappointed!

Although quite a few people I know have said that it's a great game but far too difficult too early on, if you play through the game on Easy it's possible to beat it...but it will still require a lot of effort! Thankfully, you get to keep all your powers to play through it again on the more difficult settings and I can definitely say that if you complete it, you'll want to play through again!

It's the first game I've played in a long time that feels truly epic, and it really does feel like you've taken an extraordinary journey with Gabriel when it's all done...just speaking about the game here, I'm tempted to stop doing the blog and give it another play! As you can probably tell, Konami have made me very happy with this and it's a stunning return to form....so go do yourself a favour and sell wahtever you need to to pick this up! Just remember to start on Easy!
Posted by Deadpan Flook at Friday, October 28, 2011