Zoinks! Jinkees even! It's the 8th of October already, and I'm taking way too long to get through these games, so in an effort to let you know about them all in time for Halloween, I'm going to cut down a bit on the details and try to get through them a bit quicker!


Ethan Thomas, a SCU (Serial Crime Unit) agent, is framed for a double murder after investigating another murder by a serial killer he's hunting. As Ethan, you have to use his forensic tools to try and find the real murderer and find out why he's so interested in you. This isn't made easy by the fact that something is causing the homeless population of the city to go psycho, and there are loads of them in your way! Also, you are slowly awakening to psychic abilities you seem to have....and what the hell is that scary, looking thing crawling around in the shadows??

The game plays in first-person, but combat tends to be more melee than shooter based. Any guns you do find are low on ammo, and you'll soon be picking up pipes, signs, mannequin arms...pretty much anything that can be used to bludgeon brains! Creeping around in the dark, there are loads of scares as things jump out at to attack you....and things only get freakier and freakier as the game progresses. The forensic stuff is handled brilliantly too, and helps add to the creepiness as you follow trails into dark, dangerous corners...

This was one of the first games I got for the 360, and it's still one of my favourites...it also has an awesome sequel too, and as you can get your hands on both games for only a tenner second-hand, I recommend you get using those detective skills to track them down....

Some kids are out indulging in some Trick or Treating fun, when suddenly some Pumpkin-headed Bogeyman appears and turns most of them to stone! Alicia and Greg manage to escape this fate, and in order to save their chums, they must travel to the land of the dead and track down this evil fiend!

I've only recently discovered this game, and so haven't played it that much...but from what I have played it seems to be a really enjoyable platformer, with lots of stuff to collect and find. Also, you have to switch between both characters to progress, as both have different abilities to help you get past obstacles..

Apparently, there are also Castleween games available for PS2 and Gamecube, but I can't seem to find any info about those online..after playing this though, I'm interested to know what they're like! So if anybody reading this has played either of those games, let me know what you think of them....


Fed up with his life as a wealthy businessman, Mike Dawson decides to spend his cash on buying an old, creepy mansion...where he hopes to find inspiration for a science fiction horror novel he is planning to write. During his first night's sleep in his new home however, he has a terrifying dream about an alien embryo being planted into his split head by bizarre creatures! Waking in the morning with a headache from hell, he suffers from strange visions and upon exploring the mansion finds clues about it's previous owner's death and also uncovers strange stories about a parallel universe known as the Dark World.... 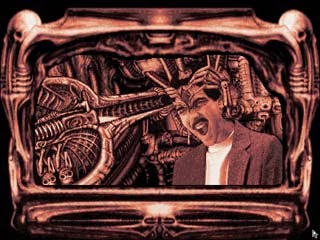 This is a groovy point-and-click adventure, with snazzy graphics as designed by H.R. Giger of Alien fame! It can be quite annoying in bits, with you needing to be at the right place at the right time to find objects to help in puzzles, and you might find yourself starting the game from scratch quite a few times, but it's worth sticking with it. It's probably best to let you find out for yourselves how the story unfolds, but you should definitely give it a bash, as it's known for being one of the freakiest games around....


Everybody likes a good dream! But, if you've been playing all the games mentioned so far in this 100 list, chances are that any dreams you do have will quickly be corrupted by the gruesome sights you've been witnessing..and will become bad dreams! This is exactly the type of predicament you find yourself in at the start of this platformer....

This particular nightmare is filled with all manner of spooky specimens. Werewolves, ghosts, skeletons, vampires, mummies...all these and more are after your soul! You must advance time to try and wake yourself up from this deadly dream, otherwise you might just find it to be a bit more dangerous than your usual night terrors! 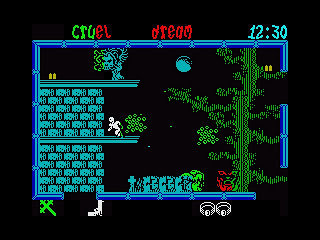 This game has always confused me! On the one hand, it asks you to wake yourself up so as you don't stay stuck forever inside your own horror-filled head, and on the other it tasks you with increasing the terror that you're enduring to get a better score by elevating the Bad Dream to a Nefarious Nightmare!

Ah well, it's a great little game anyhoo, and you can pick up guns with silver bullets and crosses and things to help you achieve these goals...and it should keep you awake into the wee small hours if you're too frightened to go to sleep in case of suffering a similar fate!

There can't be many games where you control an oozy puddle of radioactive mess, but that's exactly what you do in this pollution filled piece from Sega! After discovering his bosses evil plans for something called Operation Omega, Dr. D. Caine is captured by his aforementioned employers and injected with radioactive waste! This turns him into some sort of glowing gloop, and they flush him down the loo thinking that he's a goner....

They are of course wrong, and now as this ooze you must slide your way around the levels, trying to get your revenge, stop the baddies evil plans and perhaps (if the collecting of DNA samples suggests to me) try to return to your former..uhm...form! This is a pretty original title, with you oozing around shooting spit at enemies or extending your puddle-type fists to smack them silly. It can be damn tricky though, and it isn't always clear where you have to go or what to do. As a unique and fun game it does the trick though, so go slither yourself into a chair and indulge in some groovy glooping!
Posted by Deadpan Flook at Saturday, October 08, 2011