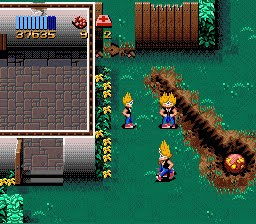 Or just plain Zombies in the UK.....this is a perfect game for Halloween! You fill the shoes of either Zeke or Julie as they take to the streets to battle all manner of horrors that for reasons unknown, have suddenly decided to launch an all-out attack on humanity! Using everything you can lay your hands on, you fight your way through waves of pretty much every classic movie monster (oh, and giant babies!) until a final confrontation with the evil Dr. Tongue who seems to be the mastermind behind this evil uprising....

The game is filled with references to classic B-movies, and if you know your stuff you'll know what weapons work best on what creatures...(Silver kitchenware against werewolves, Fire extinguishers against the Blob-type things, etc.)... Various potions can be used too, turning you into a monster that can break through walls or giving you invulnerability for a while. It's a huge load of fun, especially if you find someone else to play it with as one of you can sometimes get transformed into a zombie or a monster and lose all control as you chase down your buddy!

Weirdly, there a few differences between versions...the US version has no blood in it, and any red stuff has been turned to purple gloop! But, it does have chainsaw wielding lumberjacks which the PAL version deems too violent and replaces the chainsaws with axes (which are obviously, way less violent!?!?!?) Oh, and Americans seem to be fine with eating neighbours too! Anyway, go give it a try if you've yet to sample it's spooky superb-ness! And we'll try to forget about it's horrible sequel-that-wasn't-really-a-sequel, Ghoul Patrol....

The Nintendo 64 was often wrongly regarded as a machine for kids, whilst the PS1 was the choice for the older gamers. People complained that there were no decent games for the mature player on Nintendo's machine, and the general cuteness of it's games put a lot of people off...but then along came Shadowman!

Described by a few magazines as "Zelda's Evil Twin", Shadowman had plenty of swearing and gory, gruesome bits! It saw you play the part of Mike LeRoi, an unwilling latest addition to the line of Shadowmen...a group of Voodoo warriors blessed by the dark gods with supernatural powers, which they used to protect their tribes from threats crossing over from the undead plains known as Deadside.

The latest threat to the world is a chap calling himself Legion, who has gathered up a group of serial killers and built a huge place called Asylum in Deadside, which will enable all manner of nasties to creep over the divide into Liveside. As Shadowman, Mike is able to travel between both worlds, and must collect Dark Souls, evil energy that Legion plans to give to his many minions to make them powerful. As you collect these souls, you gain more power which helps in the fight against evil..

You collect lots of different weapons, some of which have both a Liveside and Deadside equivalent. A cool feature is being able to wield a different weapon in each hand, giving you more ways to battle the baddies! The game does play a lot like some twisted Ocarina Of Time and you can tackle it in a similar non-linear fashion so long as you have the right equipment to make it past certain obstacles.

The boss battles are great fun, and see you making trips back to some nasty, dark Liveside locations...the fight with Avery Marx as he stalks you in the dark with night vision goggles being a personal favourite! All in all, it makes for an atmospheric, freaky game that I personally think is a must-have for any N64 collector..

The game did get a PS2 sequel, Shadowman - 2econd Coming which was okay but not a patch on the first. It seemed to lose a lot of the atmosphere of the first game but I suppose it's still worth checking that out too...if you can find it cheap! 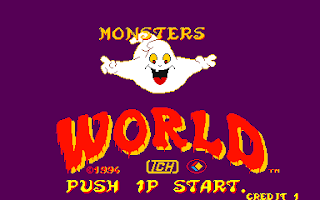 Not much to say about this one really..It's basically a rip-off of Pang! with you popping these crazy monster heads, which then split into smaller different monster heads! 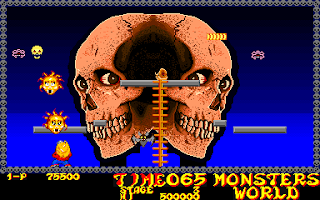 It's bloomin' difficult, and the funky background graphics sometimes make it hard to see what's going on..but if you stick with it you'll find it to be a nice puzzley-type distraction for a while!

Cursed by a family of Gypsy yuppies, this game has you hunting down every last member of that family and killing them, in a bid to cure yourself of an evil, lycanthropic affliction that sees you become a werewolf by night! You have to munch your way through London to get to them..but be careful of the police as the more you kill, the more will be after you!

You can collect various items to help you in your quest and if you eat people as a werewolf, you can find some useful stuff like train tickets which will let you into the Underground, or keys to let you enter the park. Members of the family of fiends who cursed you can be found by keeping an eye out on the bottom of the screen. A cross will flash when they are near and they are easily distinguishable from the other randoms walking around as they are always clad in black. 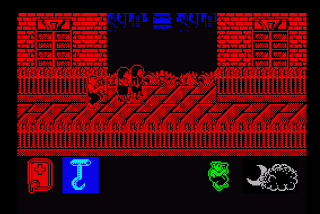 Inevitably, you'll end up in jail before you find all eight of your enemies. The key to success is to store items in your cell that will help you escape, like a file to open the window or a torch to see in the dark sewers. A manhole cover lifter gets you into these smelly tunnels so best keep an eye out for that too!

This game is brilliant, and there's loads of fun to be had prowling around London's parks, sewers, rooftops and Underground, preying on helpless civilians and armed police alike! Finding a family member always induces a slight panic as you strive to get them before they escape and legging it from the policeman with the keys who locks you up can also be a right laugh .... 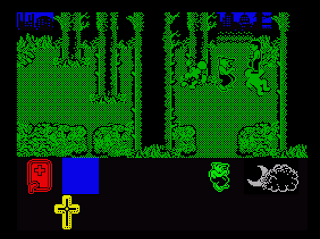 Unfortunately, the original release came with a bug which meant the game couldn't be completed. But thanks to the wonders of modern science, a bug fixed version can now be obtained from World Of Spectrum meaning you can finally be free of the curse after all these years! Hurrah!

You can get the fixed version here...

After surviving a plane crash into the Atlantic Ocean, this game's hero finds himself entering a lighthouse that also houses a lift to an underwater world where things have gone very wrong. He receives a call for help from another chap who is fighting for his life in the underwater city, and sets off to find out what the hell is going on....

Rapture, for this is the city that has went all to hell, is filled with crazy folk known as Splicers, who have genetically modified themselves via injections of a substance called ADAM...if you are to survive in this hellhole, you'll need to fight fire with fire and collect a fair bit o' this ADAM yourself. This will give you various different abilities to use against your foes...

How you go about collecting this ADAM depends on how naughty or nice you want to be...There are these little girls called Little Sisters who run around filled with the stuff, y'see! And they are protected by these mammoth lunks called Big Daddies. If you manage to take out one of these Big Daddy protectors, you have a choice of either harvesting the little sister's ADAM for yourself or setting them free from the sea-slug that resides inside them...Needless to say, whatever you choose there will be consequences....

This is an awesome game and one that really makes you think. From the dilemmas of collecting ADAM, to the twists and turns of the wonderful story of which I've been deliberately vague. You really have to experience this game for yourselves!! Go get it and play it if you haven't already! And while you're there pick up Bioshock 2 as well, as it's almost as good!
Posted by Deadpan Flook at Sunday, October 02, 2011