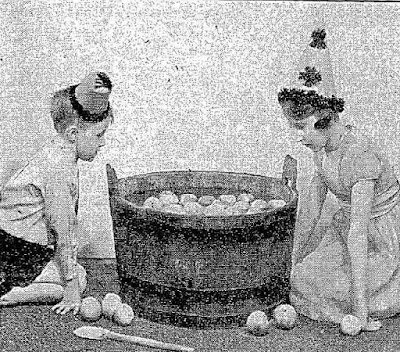 This post is an excerpt from The Scotsman newspaper dated October 29th, 1937, and gives some suggestions on how to enhance the 'great Druidic fire-festival'.....it also has some interesting theories about certain origins of Hallowe'en festivities! I'll add editors notes (*that will look like this - DPF) or links where I feel it's appropriate. Also, the above picture, and the one with the turnip lantern and cake are original photos from the article, whereas others are added by me......

Do You keep Hallowe'en in your home? That is, if there are children or young people to entertain. If not, I bid you to tak' a thocht, an' mend. (*take a thought and mend - DPF) Those of us who had the good fortune to be brought up in homes where the age-old festivals were kept know what colour they brought into our lives, and how, in some indefinable way, they linked us with the generations that have gone before us.

Briefly, Hallowe'en derives from a great Druidic fire-festival held in honour of the sun, in whose radiance the earth and everything thereon was believed to live and move and have its being. Druidism was a form of sun-worship peculiar to the Celts; and the Scots, Lowland as well as Highland, are basically a Celtic people. The Celtic year began with winter on November 1st; hence Hallowe'en is the ancient Scottish Hogmanay. 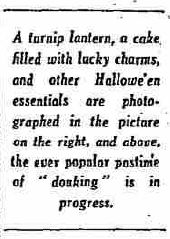 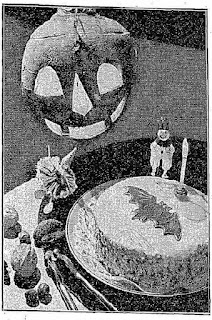 At dusk on Hallowe'en - or Sam-huinn, as it was known to our forebears - great fires were lit on the hill-tops and sacrifice made with full Druidic rites, partly as a sort of thanksgiving to the benevolent sun for the harvest had just been garnered, and partly for purification and protection from the powers of evil throughout the dark winter months.

The ancient Celts drew no hard and fast line between the world they lived in and the other world, and on Hallowe'en the veil that separated them was believed to be drawn aside. The spirits of the departed visited their old homes on this night, and all the queer, uncanny creatures of the other world were released. It was the great flitting time of the fairies, who moved from one fairy hill to another, while the witches held a great "Sabbath" on bleak moorland or wild shore, whither they flew in sieves or on broomsticks.

Amongst so many mischievous or malicious creatures it was unsafe to be abroad unless protected by fire lit at the sacred flame. Hence the turnip lanterns and the candles stuck in "custocks" or cabbage stalks that the children carry on Hallowe'en; while the grotesque "fausse faces" worn by the guisers (*Scottish Trick-or-Treaters - DPF) denote the queer creatures of the other world, from whom, too, derive the mischievous pranks played by the halflins on their elders all over the countryside. 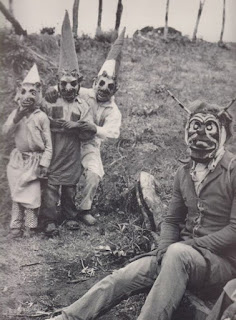 Hallowe'en was a season of omens and auguries, and two ancient Celtic symbols, the apple and the hazel-nut, play an important part in the divination rites. "Douking for apples" is in all probability a Druidic rite representing the passing through water to Avalon, apple-land, for apples are the food of the immortals. The hazel was "the magic tree that wizards loved," and the nut was revered as the symbol of wisdom.

The Note Of Eeriness

The keynote of the Hallowe'en celebrations should be a combination of eeriness and gaiety. There was plenty of gaiety, but not, I think on looking back, sufficient eeriness at the Hallowe'en revels I used to attend as a student at Queen Margaret Hall. Fancy dress was de rigueur - some of the School of Arts girls, who had a magnificent communal wardrobe to fall back upon, had wonderful costumes - with black silk masks. The proceedings began with a grand march past, during which everybody tried to "spot" everybody else; and immediately afterwards the unmasking took place, amid much merriment. There followed the age-old rites - the douking for apples, the eating of the "champit tatties" to find the embedded charms, the burning of the nuts, the three "luggies" (*a game involving putting your hand in bowls to determine your matrimonial future - DPF) and so forth. The night was then given to dancing, reels and country dancing predominating. The whole proceedings were as gay as a carnival.

The importance of eeriness was better understood at Provand's Lordship, that fascinating seventeenth century Glasgow house, whose rough, unadorned walls and time-stained rafters made an ideal setting. The only lighting permitted by the devotees who foregather there is the dancing flame of the fire and the soft radiance of candles and of the turnip lanterns that hang in a string from the rafters, eyes gleaming in quaintly carved faces. After the usual rites have been performed, there enter the guisers, who entertain the company with speech, song and dance. Auld Nick, (*the devil - DPF), who accompanies them, sits in a corner and plays the pipes or the whistle. Eerie music - there is plenty of it - is essential.

It was at a Hallowe'en party in Inverness that I saw, to my great delight, the office of Master Of Ceremonies performed by a "Druid." He entered the dimly lit room, a tall, white-robed figure with a floating white beard and a wreath of oak leaves on his head, carrying a turnip lantern in one hand a white Druidic wand (with which to stir the apples) in another. (The Druid really looked like a Druid, and not like Santa Claus in his nightie.)

Later there entered two cailleachs (old women) bearing a little old churn in which they proceeded to make stapag, or cream-crowdie (whipped cream with a little toasted oatmeal stirred in), singing an old Gaelic churning-lilt the while. The usual charms were dropped into the crowdie, which was then distributed to the company.

The further elaboration of the festival, at least when it is celebrated on a big scale, leaves plenty of scope to the imagination. A dance of witches, led by Auld Nick, might be arranged; the "champit tatties" or cream-crowdie might be prepared in the witches' cauldron; there might be a procession of Druids; old half-forgotten divination rites might be resuscitated; whilst out of doors the fire-rites and the dancing round the bonfires might be elaborated.

Druidism is dead; what matter that the solemn rites of far-off times have become the frolics of our own if they serve to attach us to the rock from which we are hewn?

On the same newspaper page is a smaller article describing how to make Turnip Lanterns. We always used to have turnip lanterns when I was a kid, and it wasn't until the late eighties or early nineties when I started noticing pumpkins appearing in supermarkets for Hallowe'en, as the slightly different US influences on the festival started to become more widespread. Anyway, here's that article as well, as it's quite a short one....

While grown-ups have been getting in stores of apples and nuts with which to celebrate Hallowe'en, the young ones - in the country at least - have been choosing turnips and thinking out wonderful designs to decorate their turnip lanterns, Hallowe'en could not be properly celebrated without them. "Dooking" for apples is fun certainly, but there is a much greater thrill in dressing up and picking one's way through the darkness to friends' houses by the light of a turnip lantern.

Great patience is required in the making of them. First, select a nicely shaped turnip, and cut off all roots and leaves. Now cut off the top as for a boiled egg. Next comes the tiresome part of the job - the inside must be scooped out very carefully, leaving the skin intact. Remember to leave a small mound at the bottom with a hole in to hold the candle. 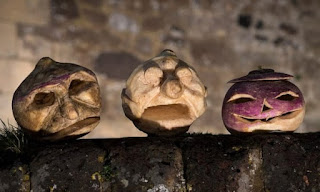 The exciting part can now be begun - the cutting out of the design on the skin. Use a sharp pen-knife and be very careful not to cut right through the skin. All sorts of designs can be cut out, the most usual being a face with eyes, nose, and mouth cut out of the skin. Now pierce a hole near the top at each side and put a string through to make a handle. A short length of candle is now fixed upright in the hole at the bottom.

the lantern, or "lanthorn" as I feel it ought to be called on this occasion, is now ready for lighting. when this is done the design is thrown into sharp relief and the result is most effective.

By the way, I hope you're remembering to check out everybody else's blogs over at Countdown To Halloween?

Go do that if you haven't already while you wait for tomorrow's post! ;-) 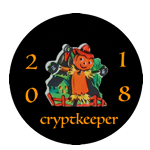 Email ThisBlogThis!Share to TwitterShare to FacebookShare to Pinterest
Labels: Countdown To Halloween!, Scans