Time for another Gruesome Games post today, and as promised, here's a few more games featuring the original garlic-dodger himself, Count Dracula! 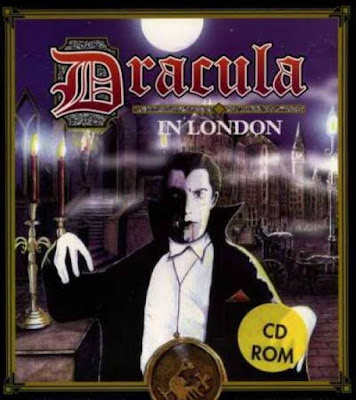 Count Dracula has arrived in London, and Jonathan Harker, Van Helsing and a few others must hunt him down and put an end to his reign of terror before things get out of control, but will they find him in time before he escapes back to Transylvania? 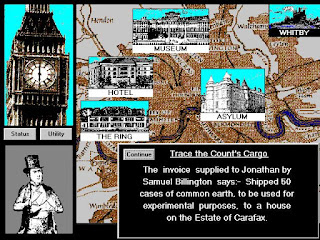 This game by Steven D.Jones is an update of his own even earlier PC title of the same name, and it's a bit odd! You can play it like a board game with a number of different players taking control of the six characters and moving them in turn, or you can play it as a solo adventure with the characters all being controlled by you, and selected by clicking the mouse on the person you want to move. 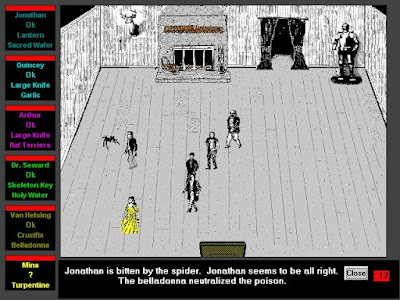 Before you get to the sections where you can move your characters around however, you need to first examine clues that will lead you to the right places to hunt the vampire. You do this by clicking an option that lets you trace Dracula's cargo, or by reading the various newspaper reports that appear at the end of each turn. Visiting the places that you're led to will again lead to more clues, that lead to more places to explore, and so on and so on.....

You can also select items and weapons for your hunters to use, like knives, skeleton keys, garlic and holy water, with some only being available to specific people....Van Helsing is the only person who can use the Crucifix, for example, and if Jonathan dies you can't examine clues anymore....which I guess makes things a bit more interesting when playing the game with several players! 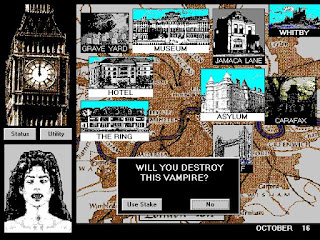 Upon arriving at a destination, your hunters either break in, pick the locks or if the doors are open, just enter the buildings and then you can click around looking for more clues, destroying coffins, fighting the various beasties that will appear to try and stop you, etc. 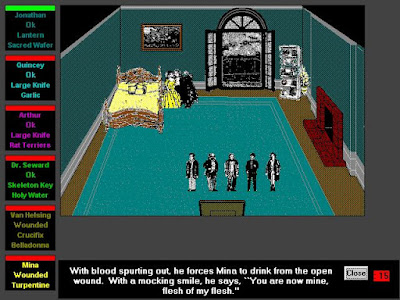 So how does it all play? Well, it's pretty basic stuff, but nonetheless quite fun! There's a random element to everything that means that no two games are the same. What happens at the different areas is generated at the start of each playthrough. Sometimes you'll find coffins to be destroyed easily, whereas others you'll never see a coffin....certain hunters might have to be somewhere else due to personal matters meaning they are unable to join the rest of the party..and sometimes Renfield will appear and try to kill you, whereas other times he might rescue you from certain doom!

It's well worth a go if it sounds interesting to you, and the game can be found for download by clicking here.... so there's no excuse for you to let Dracula carry on his fiendish fang-frenzy! Go play it! 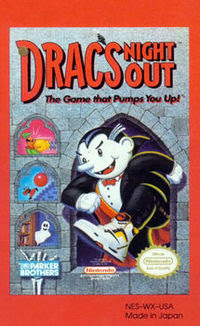 There have been some pretty weird licensed games over the years...ones starring basketball players entering other dimensions and beating people up, or eating Skittles to boost magical powers, for instance....and this game definitely joins those in the "WTF?" files..... 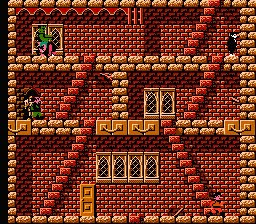 Taking control of a Dracula that, if the cover art is anything to go by, seems to be going for a Granpa Munster look, you decide to head off on a hunt for the young lady Mina, presumably to make her his bride. There's a long way between him and his fancy woman though, and a whole load of angry villagers are storming his sizeable castle to try and stop him from venturing out! 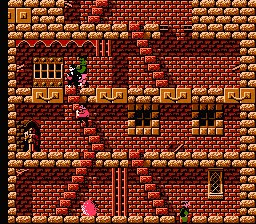 Luckily, old fang-face has set up a number of traps which he can use to stun the villagers, allowing him to suck them dry of blood. Blood is much needed, because if there are no traps around, Drac has to stun the villagers using his hypnotic gaze, and that drains his blood supply, so topping up is essential. 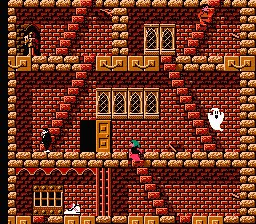 If you manage to drain five villagers, you get to turn into a bat, which lets you descend the castle stairs, of which there are many, a lot quicker. Of course, if you aren't able to get enough blood to do this, you could always use the amazing Reebok Pumps that you find lying around to boost your speed and improve your jumping capabilities! 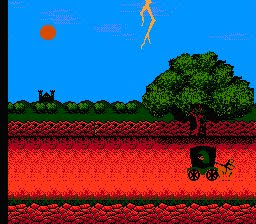 Once you've used Frankenstein, ghosts, flying swords, rolling boulders and the like to dispose of the villagers and make it to the bottom floor of the castle, you escape in your carriage to the local town, where the game takes a sort of top-down-but-slightly-at-angle-type view, and you search around for Mina's whereabouts... 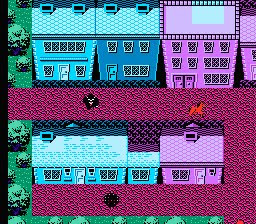 Munching on the random villagers here nabs you keys, which you can use on some of the houses in the village. Upon entering these random homes you'll either find helpful old gents who will show you where bridges, trapdoors or other things are on the town map, or ladies who will lead you in the general direction of Mina once you've turned them into vamps! 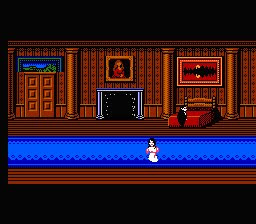 Of course, the villagers are still angry, and large mobs of them will try and stop you, which you can't do much about in the town, except try to avoid them! This is where the game gets tricky, because the camera doesn't always move forward enough to let you see where these mobs are, meaning you'll blindly stumble into them, dying instantly....which is also the case when you're descending the stairs in the castle. It's these dodgy camera issues that make the game way harder to play, and ultimately cause the frustration that will make you stop after a few goes. 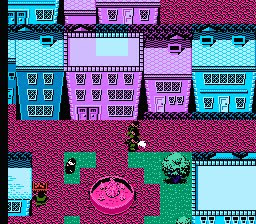 It is enjoyable stuff for a while though, and good enough to come back to once the frustration has died down a bit...and if you can manage to bear it, the game will let you continue until the the in-game clock strikes 6 in the morning. 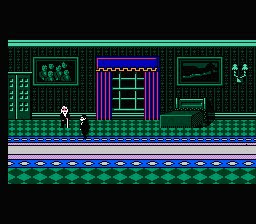 Never actually released, you'll find this game kicking it's Reeboks around on the internet in Rom form, but there are some custom carts out there for the actual NES too, if you know where to look! Definitely worth a play before you buy it though, just to see if it's your thing! 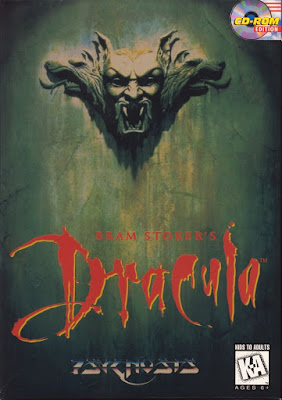 Another official game of Francis Ford Coppola's 'Bram Stoker's Dracula' 1992 movie next, and this one is from 1993. And as 1st-person shooters were popular on PC at the time, and about to become more so with the release of Doom, that was the route Psygnosis took with the licence for the DOS version.. 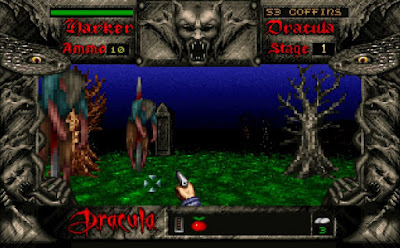 As Jonathan Harker, you start the game in a cemetery, and have armed yourself with a gun and a knife. Surrounding you are various graves, ominous looking trees and several very-similar looking impaled victims of Vlad Dracul! Weirdly, they've all been placed into formations that almost seem to create paths of a maze, and so you'll need to navigate your way around them as you try to find graves filled with evil Transylvanian dirt that are spawning skeletal warriors, zombies and other creepy creatures, so you can bless them with holy wafers and stop the monsters from spawning! 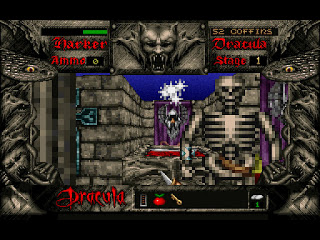 You'll find these wafers lying around the place, along with food, bullets and keys. Keys are required to open some of the doors to other areas, and you sometimes need a specific kind, such as a ruby or gold key, to progress through certain doors. Other doors just need you to press a button to open them, which can be a bit annoying when you've got the gun in your hand, as you'll accidentally fire a shot instead of pressing the switch... 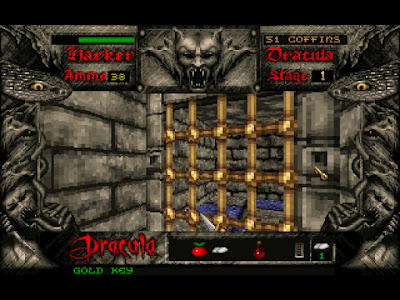 Spooky music helps add to the atmosphere as you wander through the levels, and initially things are pretty fun. If you're like me though, you'll soon get stuck without the right key, and the very samey graphics make it very easy to wander around aimlessly in circles. 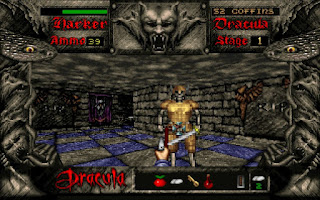 So far I've destroyed about 7 or 8 defiled graves, and now have no idea where to go next. The music that at first seemed quite atmospheric is now grating on my brain, and I'll be seeing that same impaled-dude-on-a-stick in my sleep... 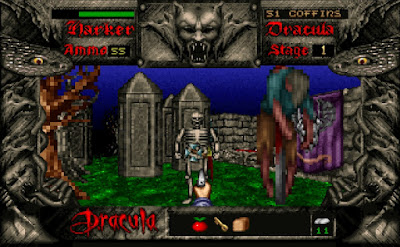 And yet, this is still probably my favourite game based on the movie, and I will be going back to it after a while to give it another go, as despite the games problems it isn't at all bad for the time that it was released! You should probably go give it a try too, and if you manage to find the Ruby key, let me know where to find it! I've been looking for ages....... 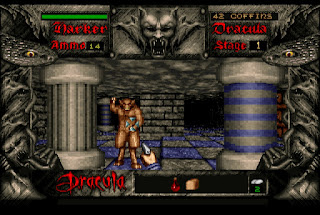 Blimey! Not long to go until Halloween at all now, is it? Best get over to the Countdown hub by clicking the badge below and checking out the other bloggers taking part!